When Paul J. Thompson takes to the sea in his sailboat, La Chica, he can’t hear the sound of the waves or the approach of other vessels. But he doesn’t have to. He has a cat for that.

Strauss von Skattebol of Rebelpaws, a.k.a. Skatty, is a 6-month-old polydactyl Maine Coon, who, at his young age, has already proved himself to be an essential part of Thompson’s crew. Thompson — a small-craft naval architect and computer programmer in Auckland, New Zealand — is the first deaf person to sail across the Southern Atlantic Ocean alone, and he built his 32-foot sailboat himself. 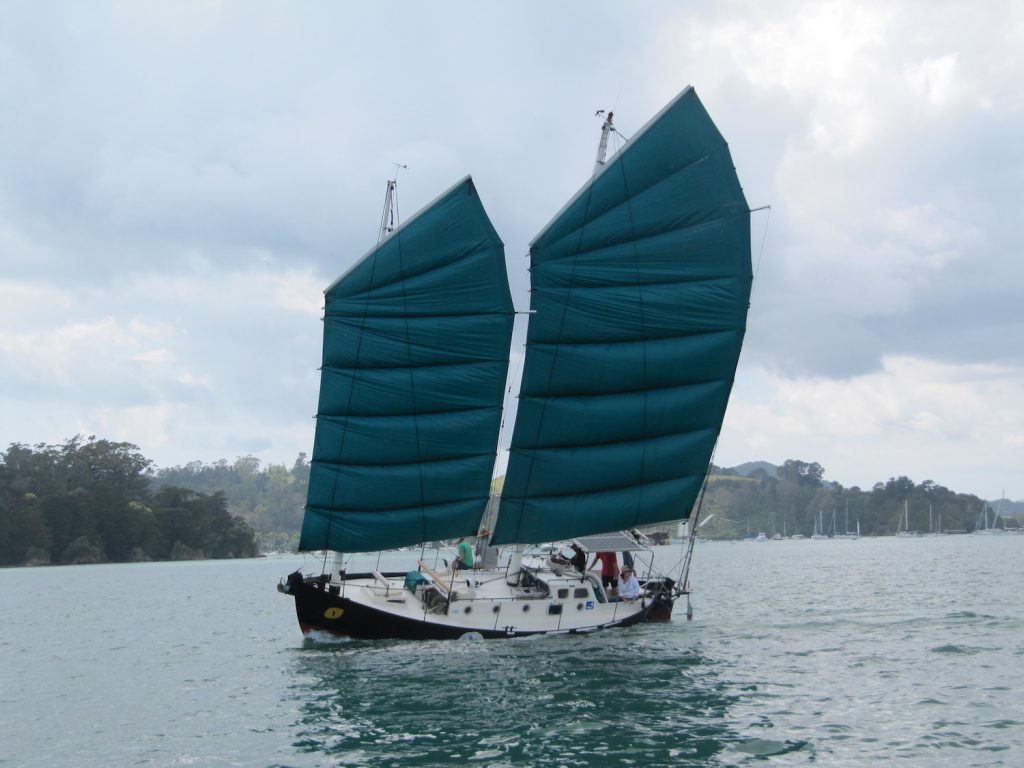 Thompson hopes to circumnavigate the globe in La Chica single-handedly — but not single-pawedly. Because with Skatty’s four paws and furry ears on board, these two sailors make an unstoppable duo.

“Without any training, Skatty has twigged that I don’t hear,” Thompson said. “He lets me know if a boat comes alongside, people are at my door (ashore) and when my phone receives text messages.”

Skatty alerts Thompson to texts by either putting his paw on the phone or by sitting on it. To tell Thompson that someone is at the door, Skatty will walk to the door or get Thompson’s attention with his body language.

Thompson elaborates, “Also Skatty has learnt to get my attention by coming and putting his paw on my knee and I’ve learnt to get up and follow him. Which normally leads to his food bowl (empty) but often enough it’s something that I’m glad to know about.” 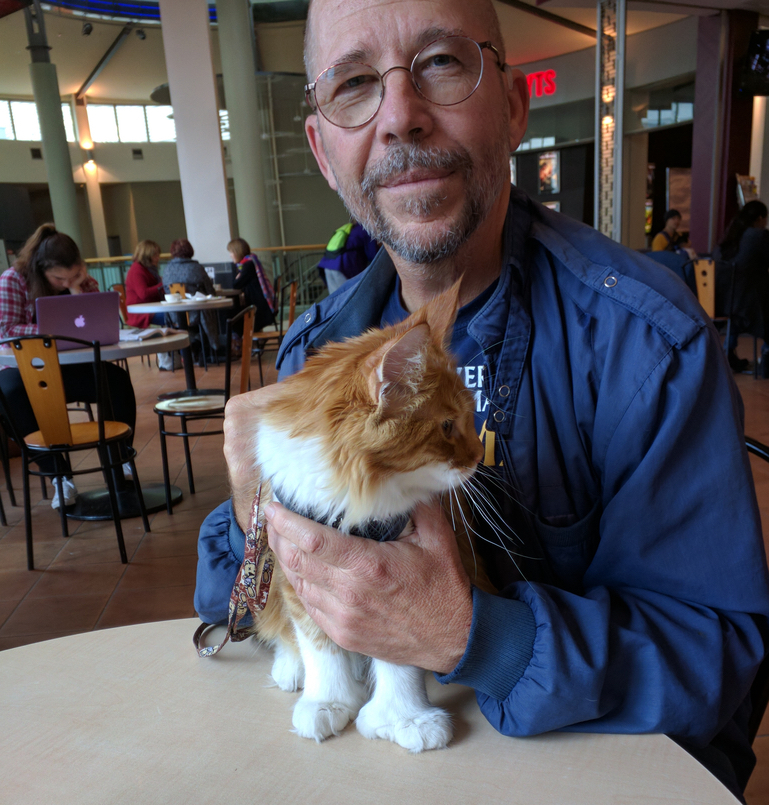 As for Skatty’s distinctive full name, Strauss von Skattebol of Rebelpaws, it comes from his pedigree. Thompson adopted Skatty from a responsible breeder because he always wanted the companionship of a Maine Coon but couldn’t find one as a rescue in New Zealand.

Skatty’s breeder dubbed the kitten “Strauss” because the feline’s father, Coonity Van’Yar, is Austrian. RebelPaws is the name of the breeder where Skatty was born, and due to cat registration rules, the name of the breeder must be in the cat’s official name. Finally, Skattebol translates to “my darling” or “my treasure” in Afrikaans, which is Paul’s second language.

MORE: The complete guide to boating with cats

Skatty’s long name is certainly something he will grow into — along with his huge paws.

“When Skatty is fully grown, he should be quite a regal looking cat, and the name should fit purrfectly,” Thompson confirms. 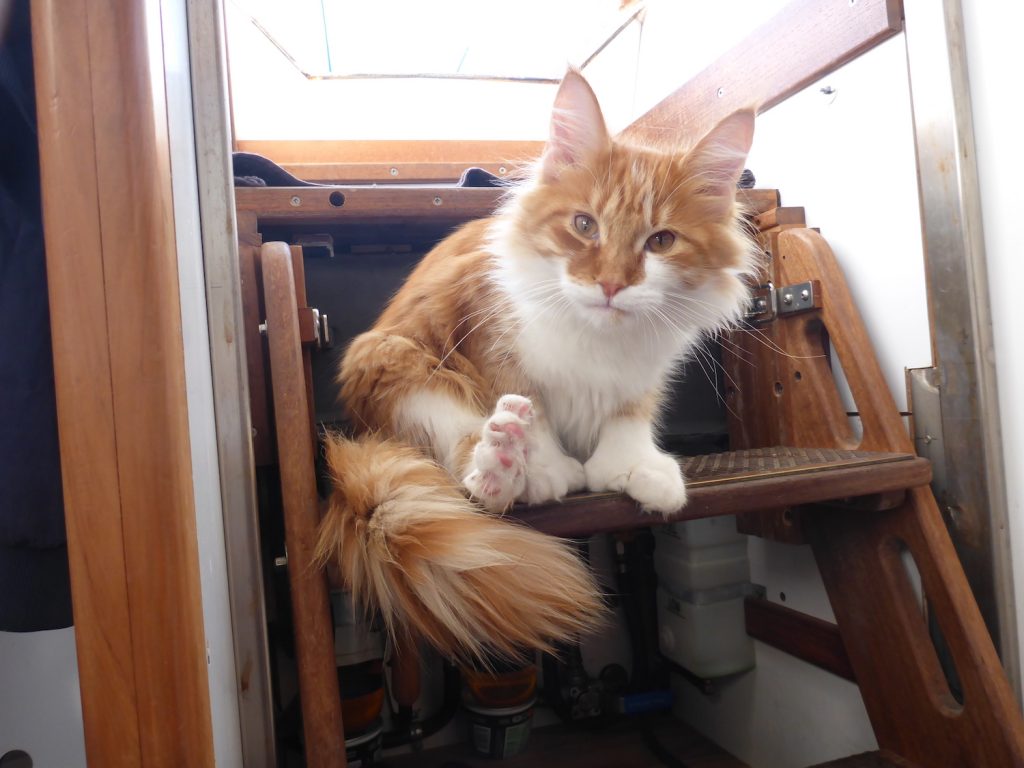 Skatty’s destiny to be a sea cat is linked to his human’s longtime desire to have a Maine Coon cruise alongside him.

“Maine Coons are at home around water and in this case, Skatty is a polydactyl cat, which is what ships’ cats traditionally are,” Thompson said. “The old time sailors believed that the big polydactyl paws gave them a better grip on the deck and also made them better mousers. So for me, as a sailor, it is very satisfying to have a polydactyl cat.” 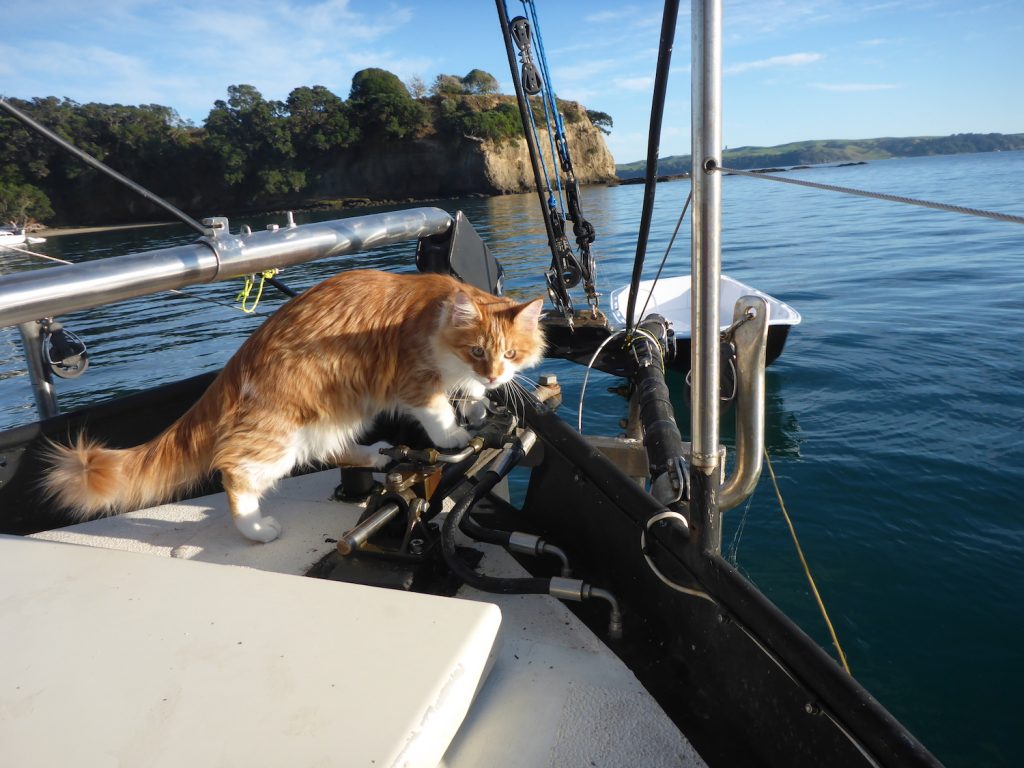 Skatty and Thompson spend their summers aboard La Chica, and in the winter, they split time between the boat and a nearby apartment. When on board, Skatty can usually be found with Thompson or in one of his favorite spots.

“When at anchor, he likes to sit on the solar panels as it gives him a good view, and since the panels are dark, they keep his bottom warm,” Thompson said. “Does not do too much for the charging rate however.”

When the weather is rough, Skatty hangs out below deck under the salon table. And at night, Skatty sleeps in the crook of Thompson’s knee. 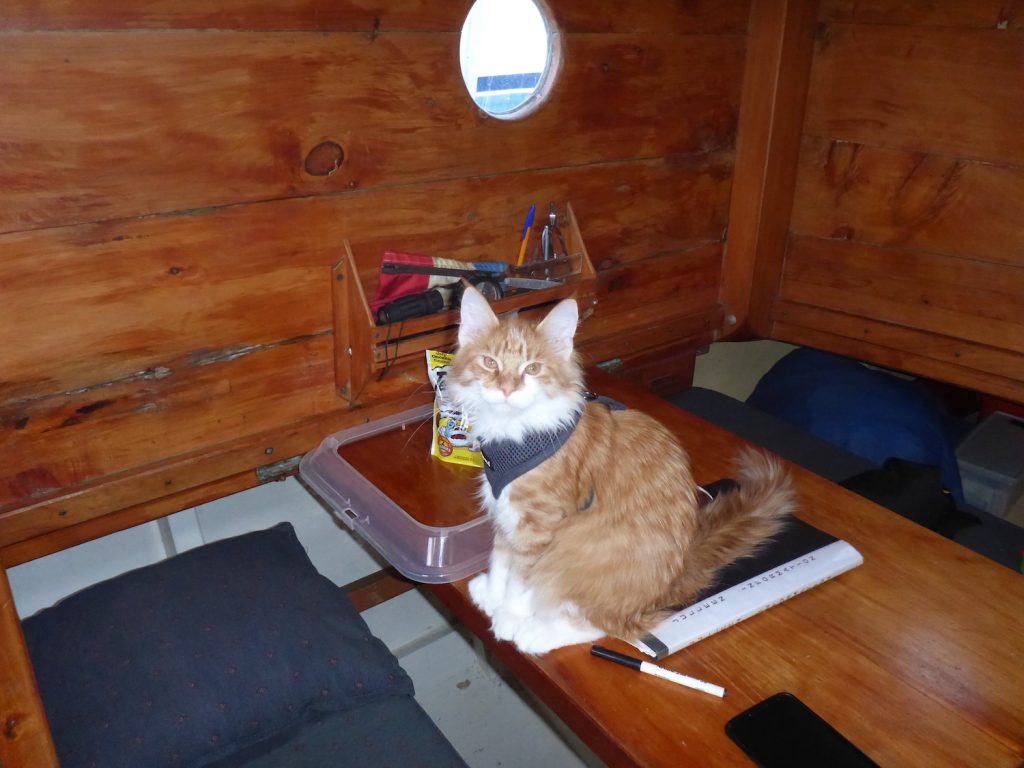 When aboard La Chica, Skatty uses a litter box that stays on deck while at anchor and is placed in the lavatory when underway. Skatty’s box uses pine pellets, which are also used in the ship’s composting head.

In addition to Skatty’s litter box, Thompson brought a few additional items aboard La Chica to ensure Scatty’s health, safety and kitty comfort, including a fishing net should Skatty ever fall overboard and require rescue. 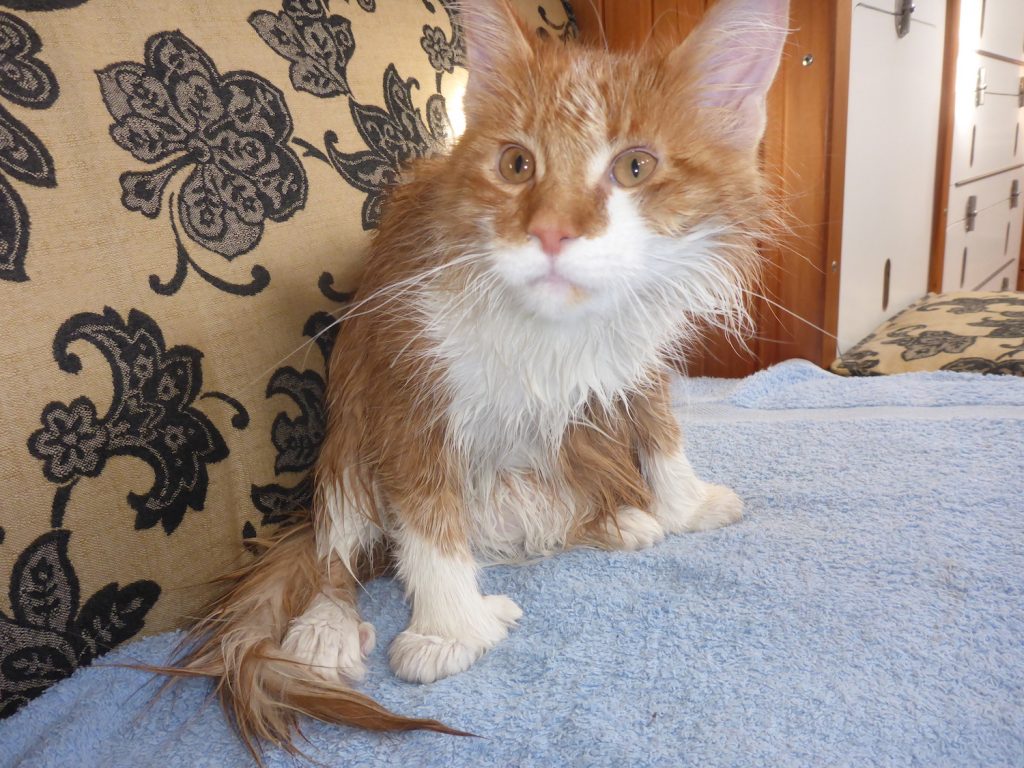 To date, Skatty has only fallen in once, but Thompson was ready to scoop him out of the water. For additional cat safety, Paul attached a rope ladder to the stern of the boat so Skatty can pull himself out of the water unaided.

Thompson uses a portable refrigerator for Skatty’s food. As a vegan, he doesn’t require much refrigeration, but he sees to it that Skatty is well fed.

“Ashore or when coastal sailing, Skatty gets raw food, which in New Zealand, can be bought coarsely ground with bone and heart in it,” he said. “When voyaging, when it’s not possible to carry enough raw food for the duration, he gets the wet cat food that is available in pouches.” 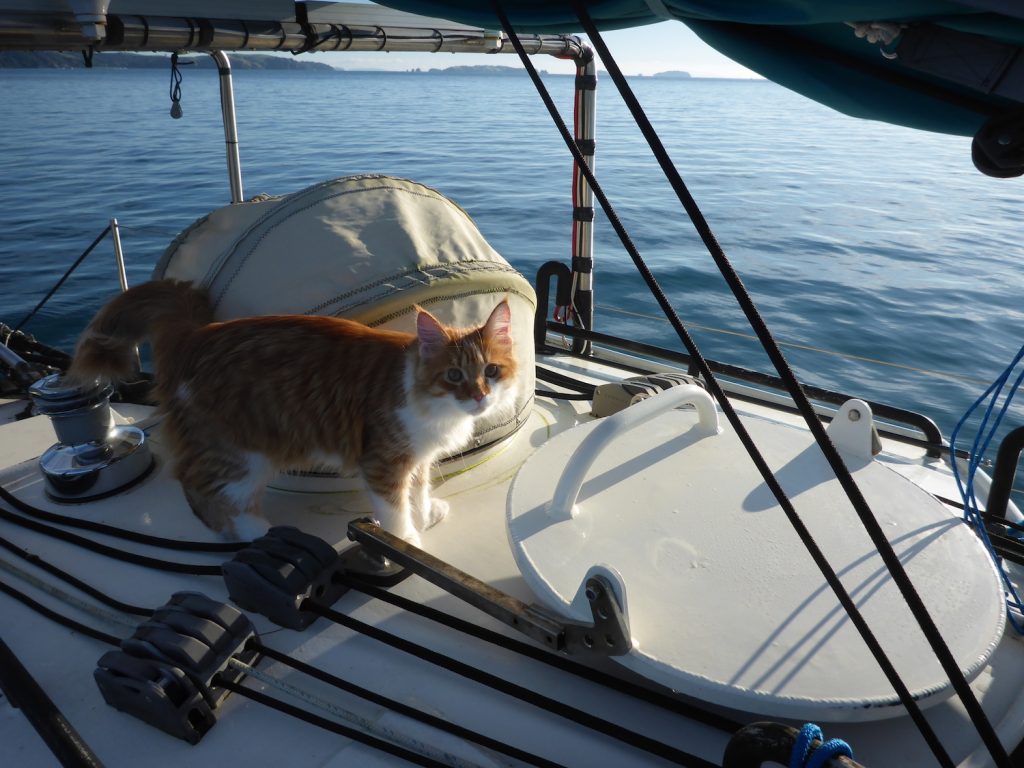 When asked what Skatty thinks of sea life, Thompson said, “He thinks it’s ‘meals on wheels’ or the marine equivalent. His big ambition is to catch a seagull…but so far no luck!”

The companionship and unique perspective that a cat provides are some of Thompson’s favorite things about sharing his vessel with Skatty. “Having a cat on board forces you to slow down and take life at your cat’s pace. Invariably, that is a good thing as we are all far too busy rushing around. Skatty wants to know about everything and, in satisfying his curiosity, I learn to see things in a new light or from a different perspective. Also, the love of a cat is a very special and precious thing.” 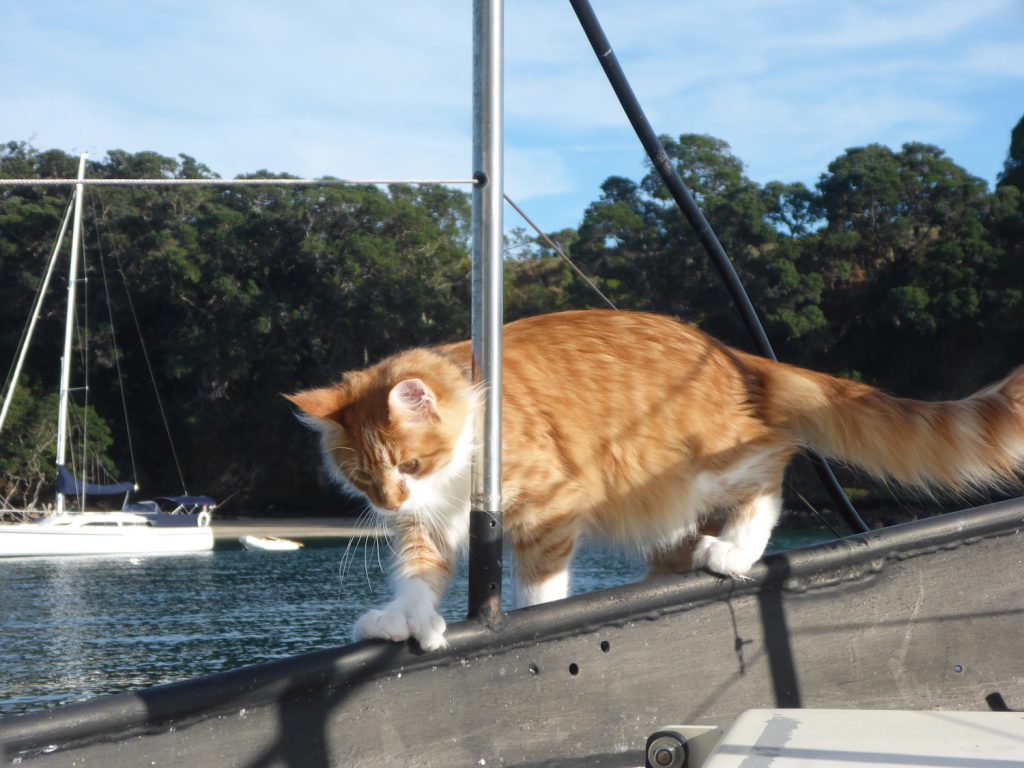 Thinking of bringing your kitty on board? Thompson said it’s important to introduce a cat to their new environment slowly, especially since loud diesel engines can scare cats at first. “Once you can start the engine without kitty going haywire, go for a short trip and then gradually increase the duration,” he said. “Most cats are purrfectly content under sail and at anchor.

“Be extra careful if you are anchored or moored in a strong tidal stream as it can be that your cat may be swept away before he can save himself. Lastly, it is absolutely vital for your cat to come when called. It is easily done with clicker training. So please take the time to do it.”

Speaking of safety, while Skatty can swim, he wears a life jacket in La Chica’s dinghy when the seas are rough. Otherwise, he wears a harness. 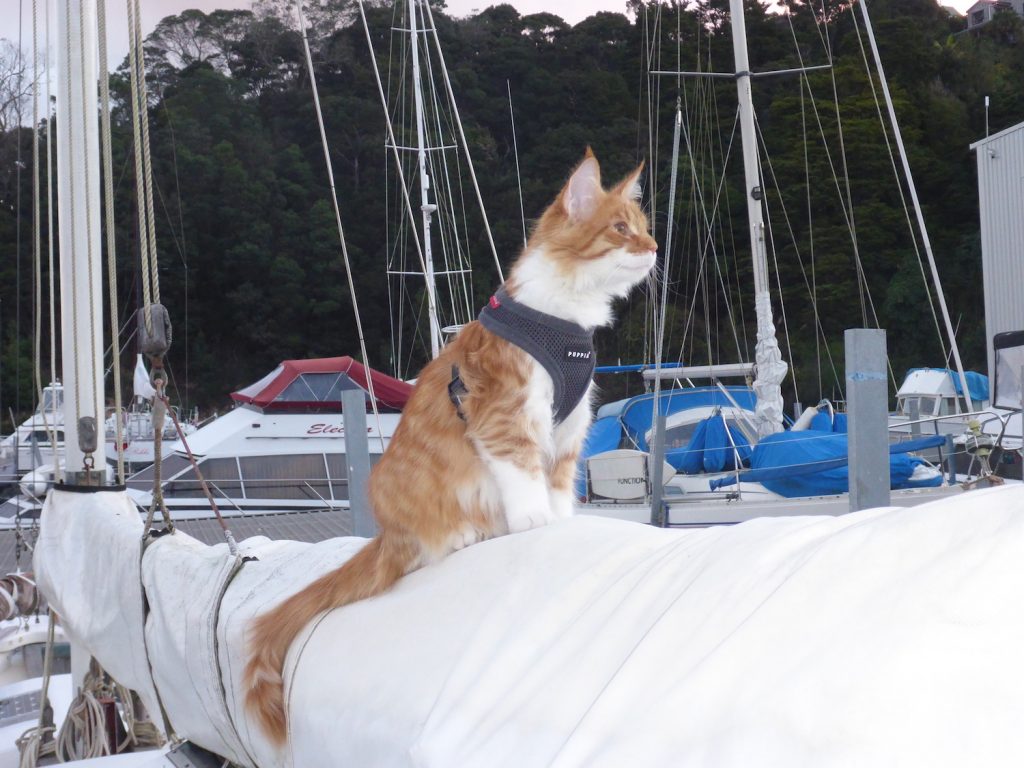 When he’s not adventuring or spending time with his favorite human, Skatty is working toward becoming a therapy cat, and he often visits people in hospices.

“Older people in these places are often desperate for a bit of attention and love, and a cat does not care that they are sick or may be not so good looking any more,” Thompson said. “Skatty just loves them all.” 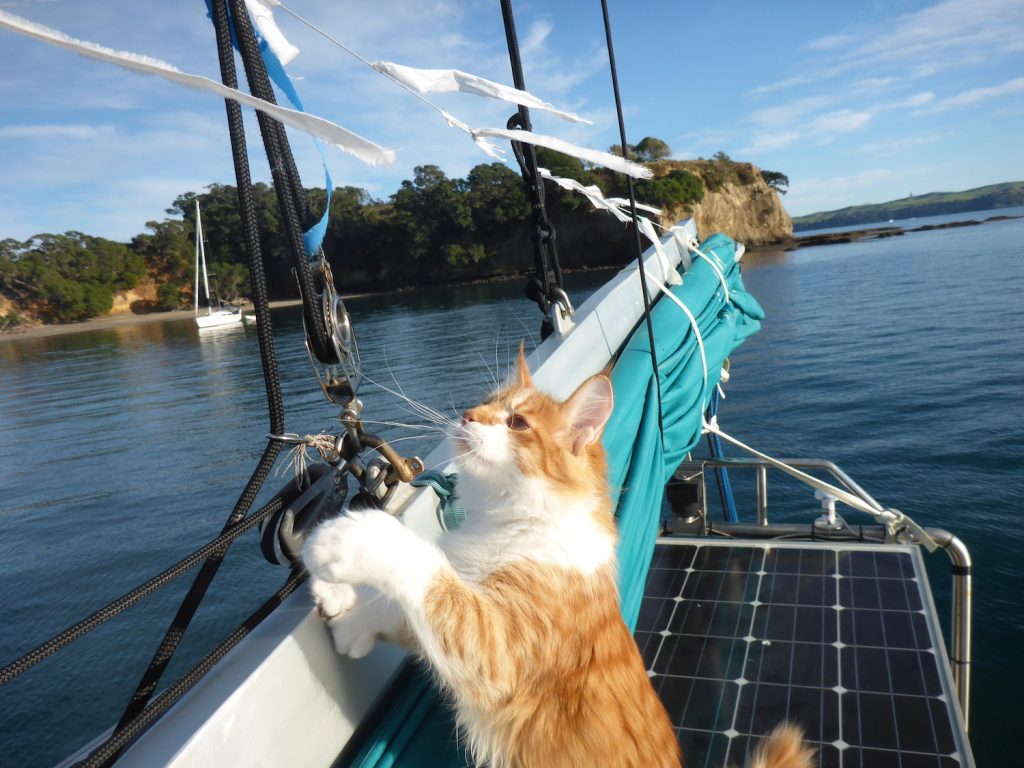