Strutting his stuff down the streets of California, Omar Little the Sphynx Cat is a celebrity in his own right. Owners Sam Kriemelmeyer and Briana Bainbridge take him with them wherever they go. Sure, this hairless breed may get a few strange looks — but he makes many more friends during his cross-country adventures.

Adventure Cats: Can you tell us a bit about what makes Omar special?

We are convinced he is from another planet.

Kriemelmeyer: Omar is from a reputable California-based Canadian Sphynx breeder. Sphynx Open Arms Rescue (S.O.A.R.) is also an amazing place to find this breed if you do not want to go purchase one from a breeder. However, nearly all Sphynx cats have special needs.

We are convinced he is from another planet. He has an extremely outgoing personality, and will literally jump up into the laps of strangers when out in public. He loves being in close proximity to a human; either he thinks we are big cats, or he thinks he is part human.

Omar has a great “stanky leg” dance because he dislikes getting anything between his toes. He likes being as warm as possible all the time, always seeking the hottest part of a room. He is great with all types of travel, being out in public and experiencing fine meats from all over the country. His odd looks spark a spectrum of different reactions from people, from adoration to horror. Mostly adoration.

What inspired your first adventure with Omar?

His very first adventure was the day we met him. He traveled over 400 miles with us in a little sports car, all the way home. A wee kitten then, even in that first car ride he was eager to explore and was very playful. We wanted him to be as comfortable as he was inquisitive, so we began supervised outdoor adventures even when we first got him. He had his first harness and leash at 10 weeks old. 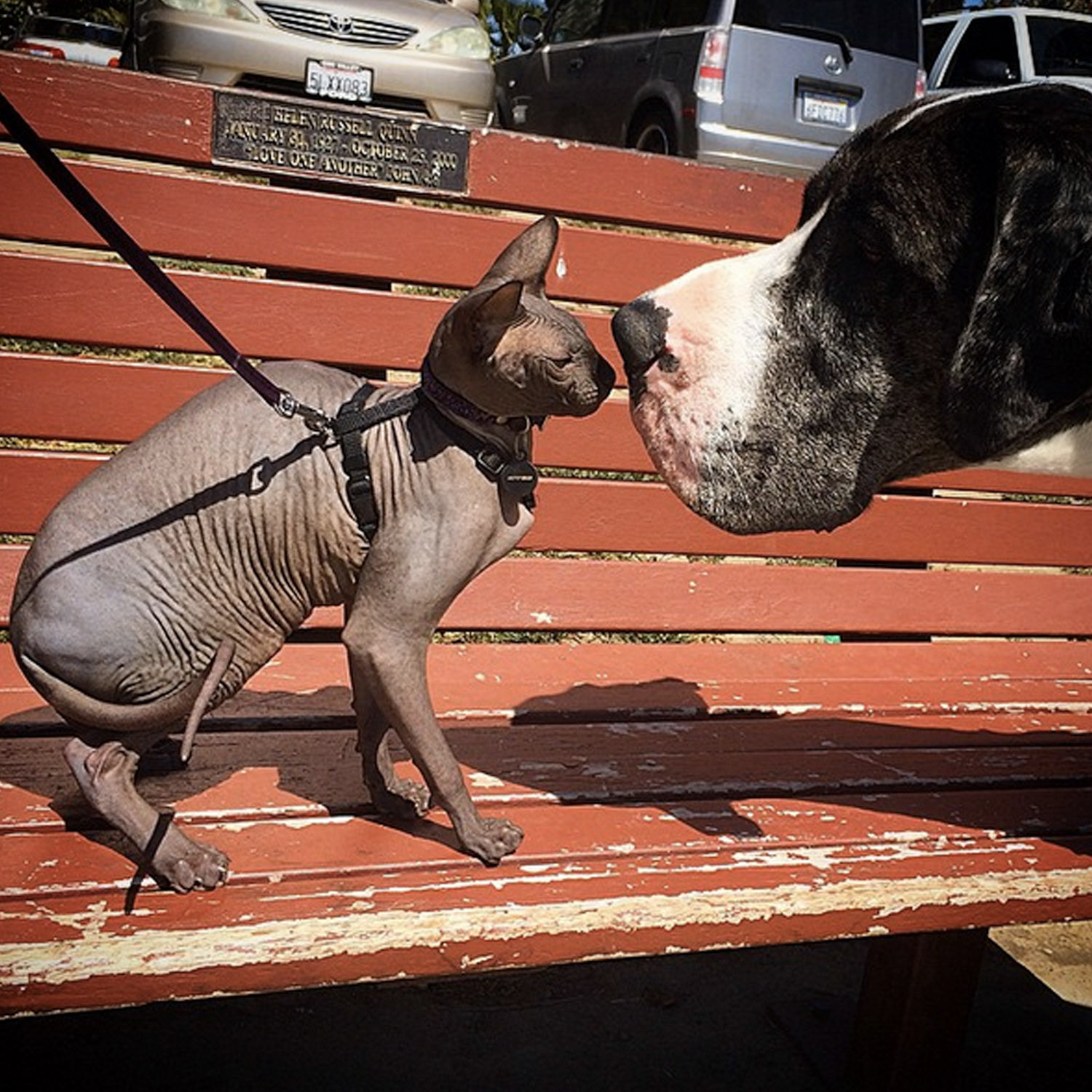 Omar thinks he’s one of the guys — whether the ‘guys’ are dogs or humans.

People often compare Sphynx cats to dogs. Would you say that comparison is accurate for Omar?

That’s actually the primary reason why we chose him. We wanted a cat that we could take places like a dog. It is harder to hide things in the house since he is a dog that moves vertically as well. He’s very social, outgoing and incredibly affectionate.

Omar is extremely food-motivated, which helps with training. He’ll voraciously eat whatever he can get his paws on, and it’s easy for him to reach pretty much anywhere. Needless to say, we’ve gotten in the habit of keeping our kitchen counters clear of anything he could get into. We even had to install child-proof locks on our kitchen cabinets!

Like a dog, he knows and responds to his name, but he’s not exactly obedient. We’re pretty sure he sees himself as our equal. People approach us, usually mistaking him for a dog. It’s no wonder, since it’s not typical to see a bald cat outside on a leash. There is always some level of freaking out and a humorous comment that follows. People who like cats but have allergies are especially excited to see him and pet him, because they assume they will not be allergic to him. (Spoiler alert: Sphynx are not hypo-allergenic.)

What’s a typical excursion like for you and Omar?

He knows fun is coming when he hears us grab the harness and leash. There is always a bag of necessities. Depending on how far we’re going, we bring different amounts of supplies. We always have treats, his Moby wrap and a laser toy for fun. 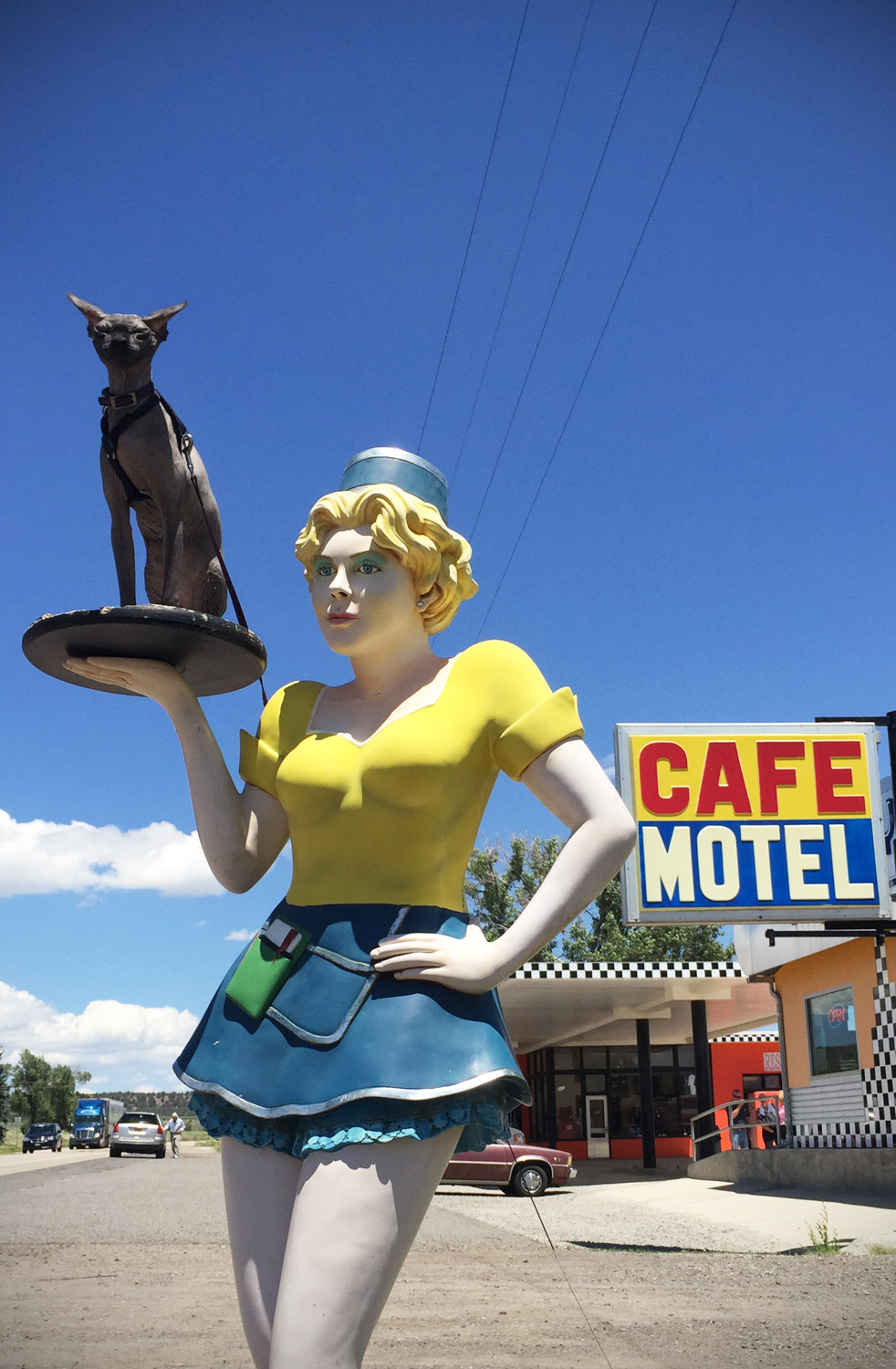 Order up! Omar is truly a little cat with big attitude.

Sometimes he wants to walk on his own, but often he prefers to be secure in the high perch of the papoose. When you are walking a cat, you have to go at their speed, and it varies. For longer trips we bring more substantial food, a water bowl, a portable litter box and an umbrella for shade. We have to be very cautious about Omar’s level of sun exposure because he will burn. There is no sunscreen that is safe for cats.

As for the adventure, he is always eager and sure to meet many people. Since his announcement to run for Purresident in 2016, it has become increasingly difficult to get anywhere fast among crowds of people. He is humbled by the attention, meanwhile kissing hands and shaking babies.

What’s the best part about adventuring with Omar? Are there any disadvantages?

The best part about adventuring with him is that we get to keep him with us and he is not left alone at home. We don’t have to feel guilty about traveling, and we obviously prefer him with us.

There are disadvantages of course, but they’re not too much to deal with. It just takes extra time and preparedness to meet his needs. Pets are not allowed to be everywhere that we might want to go. Depending on the situation, sometimes we go for it anyway. Occasionally Omar has been known to confuse and mesmerize them to the point where they forget the “rules.” 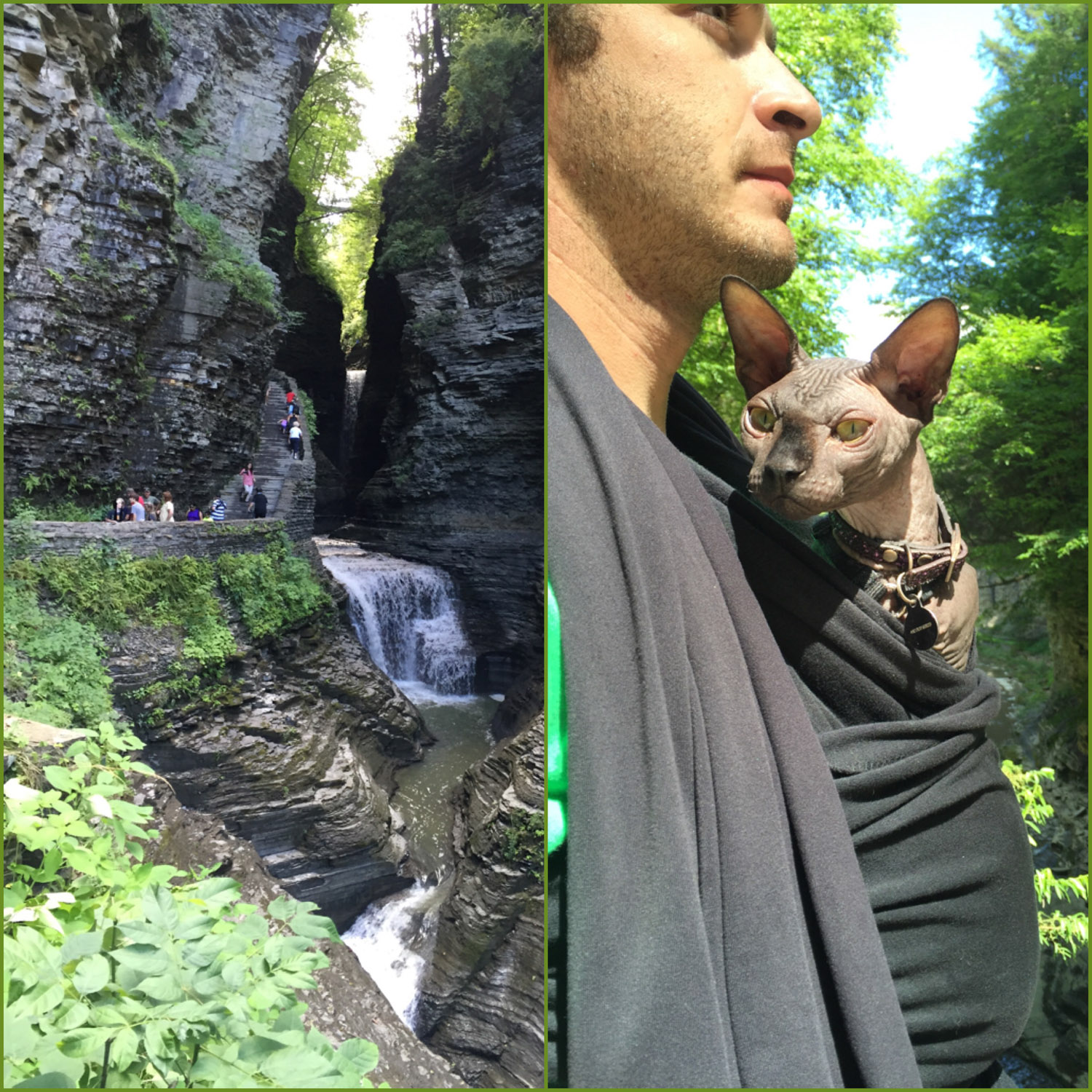 Omar’s humans always have a Moby wrap on hand in case Omar needs a rest during their hike.

What’s one of your favorite memories with him?

He’s only a year old and has seen more states than many humans.

Well we’ve only had him for a little over a year, but driving across the country 4,100 miles in a compact station wagon from the 80s this summer was really awesome. He had his perch in the back, but spent most of his time in a human lap. Along the way, Omar really enjoyed our National Park System, hiking some of the most breathtaking journeys our country has to offer. The Instagram opportunities were endless, and he was a champ the entire time. He’s been more places than most people!

Another one of our favorite Omar adventures was when we were in Baltimore this past summer, and took him to an outdoor movie at the American Visionary Art Museum. We had to park about more than a mile away because it was such a popular event. When it was over and time to walk back, there was a huge crowd of more than 3,000 people, but he didn’t want to be carried. He walked back the whole way, all around the beautiful Baltimore Inner Harbor at night. We had a bunch of friends with us and it was really fun. He went the whole way at our speed like a dog. We were very proud of him that night. The only stop was after he found some rogue chicken wings on the ground. He really wanted those chicken wings.

Have you done any training with him? If so, what kind?

We’ve done a lot of leash training. Our method is pretty much just to make it rain meat. We want him to associate walking on the leash with happy times and meaty goodness. He doesn’t do tricks.

We’ve also been training him to use the toilet. He started doing it on his own, so we figure why not?! We’ll support this! It would certainly make airline travel simpler.

What part(s) of the world do you tend to explore?

Target at the mall. Just kidding, we live in a beach town in Southern California, so we take him to the beach and camping with us in the mountains regularly. We’re both from the East Coast and visit somewhat frequently, so we take him there too whenever we visit. He’s only a year old and has seen more states than many humans. We both travel for work, so who knows where we will get to take him next. His 2016 campaign trail will take him through all the continental U.S.

What advice do you have for people considering taking their cats into the great outdoors?

Start slow and start young if you can. Also, don’t force anything. We have another cat who does not go on adventures. She does not enjoy being in a harness or going anywhere, and that is fine. Not all cats want to be adventure cats. You have to follow their lead, and not push them too far out of their comfort zone.

All photos courtesy of Sam Kriemelmeyer and Briana Bainbridge.