If you want to take your kitty climbing, there are many things to consider before you grab the leash and your gear and head out the door.

To help you “purrpare,” we interviewed three rock-climbing cat owners to show us the ropes of crag etiquette and offer up tips and tricks to ensure adventure cats stay as safe as “pawsible.”

“Artemis didn’t start liking the outdoors until we started taking her outside every day,” said Los Angeles resident Taya Treulieb-Kolostyak who named her 1-year-old rescue cat after a Greek goddess.

Sandra Samman of Boulder, Colorado, began taking her longhaired tabby, Denali, on walks right after she adopted him, and he accompanied her to Wyoming’s Ten Sleep Canyon at just 3 months old. “If you condition a cat when they’re a baby, going outside isn’t a problem,” Samman said.

When his cat Cali was a kitten, Evan Wiltzen would always put her on his shoulder to get her used to being a “shoulder cat” during hikes. Evan’s climbing gym in Alberta, Canada, allows pets, so he was able to get Cali acclimated to wearing her harness and approaching other people and their pets on a regular basis. 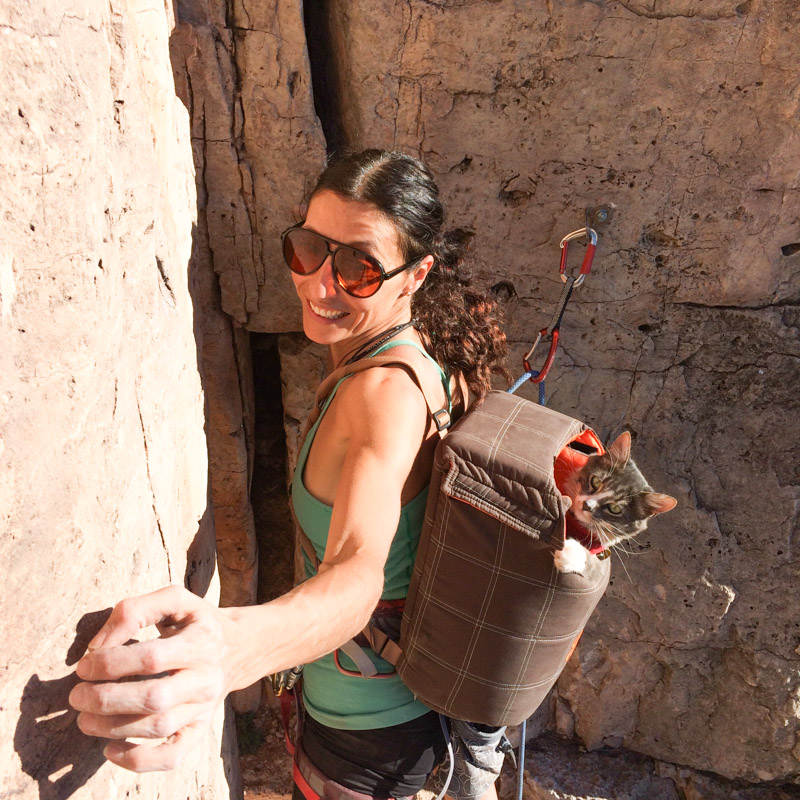 Denali is so comfortable on climbs that he often grooms himself on the way up.

Train at home before you go.

In addition to leash training, it’s a good idea to train your cat to come when called before you ever venture outdoors. Cats are certainly trainable animals if you implement positive-reinforcement techniques, and you’ll be glad your feline friend learned this skill if you ever have to use it.

“It’s important to have them respond to their name, so you can call them back if danger arises,” said Samman, who says she constantly calls Denali by name and rewards him when he responds. 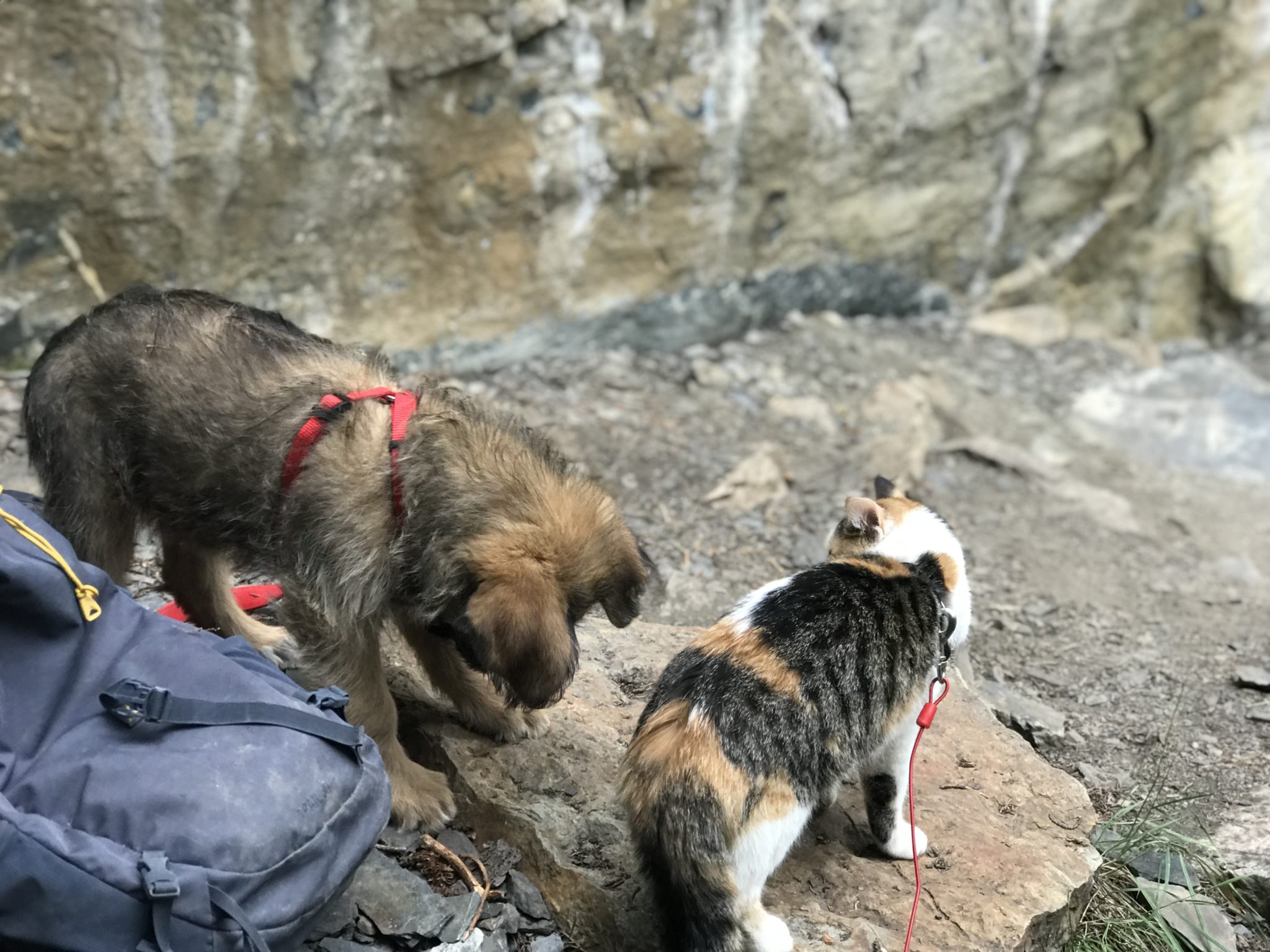 Cali is accustomed to making friends of the canine variety.

Be aware of dogs.

Dogs can make things complicated at a crag. Many climbers own dogs, so you should always approach a crag expecting to see a canine. Some crags — such as Pipedream in Utah’s Maple Canyon in the summer or PMRP (Pendergrass-Murray Recreational Preserve) at Kentucky’s Red River Gorge in the fall — can be crowded with packs of unleashed dogs.

So if you’re planning a climb at a popular crag, it might be best to reconsider and go somewhere else.

Also, ensure fellow climbers are on the same page about leashing their pets because animals can be unpredictable. In fact, Samman says she’s had issues with dogs trying to attack Denali in trailhead parking lots.

However, Wiltzen says that Cali, who’s now 1 year old, has plenty of four-legged friends at the climbing gym. In fact, most dogs “are more apprehensive of her than she is of them,” he said.

Treulieb-Kolostyak says that if there are dogs around, she keeps Artemis in her backpack while she’s climbing. That way the belayer doesn’t risk losing concentrating on the climber at any given moment. 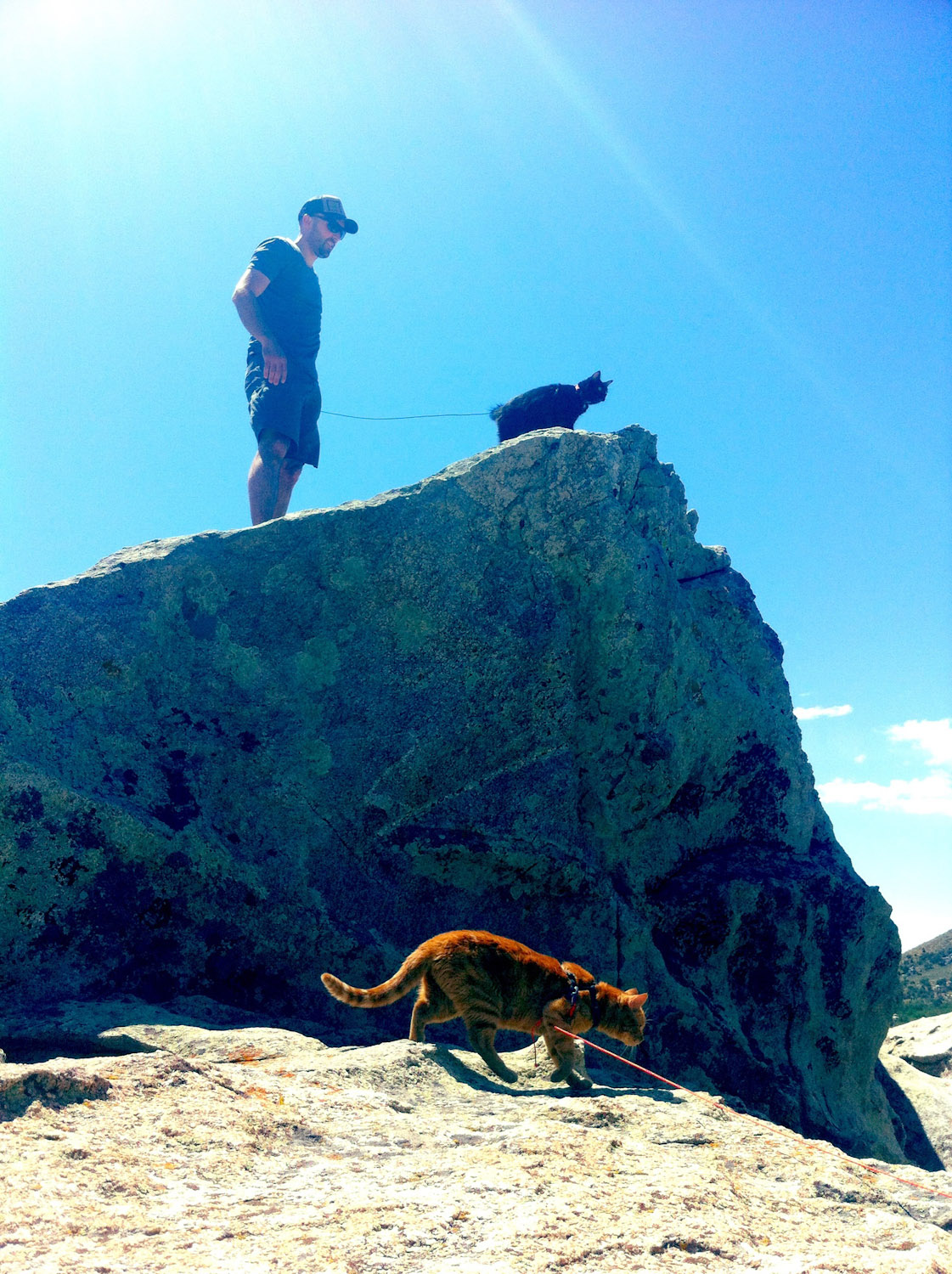 The majority of public parks and climbing locations require pets to be leashed, so bring a leash out of respect for these outdoor areas.

There are other reasons to bring a leash, too, such as the fact that cats are natural hunters who might get distracted and run off. You don’t want to risk losing your pet at the crag even if he or she tends to stay by your side most of the time

Samman suggests bringing different leash lengths. That way if you’re the only climbers at the crag, your kitty can roam on a longer leash or stay close by with a shorter length if dogs or people are nearby. 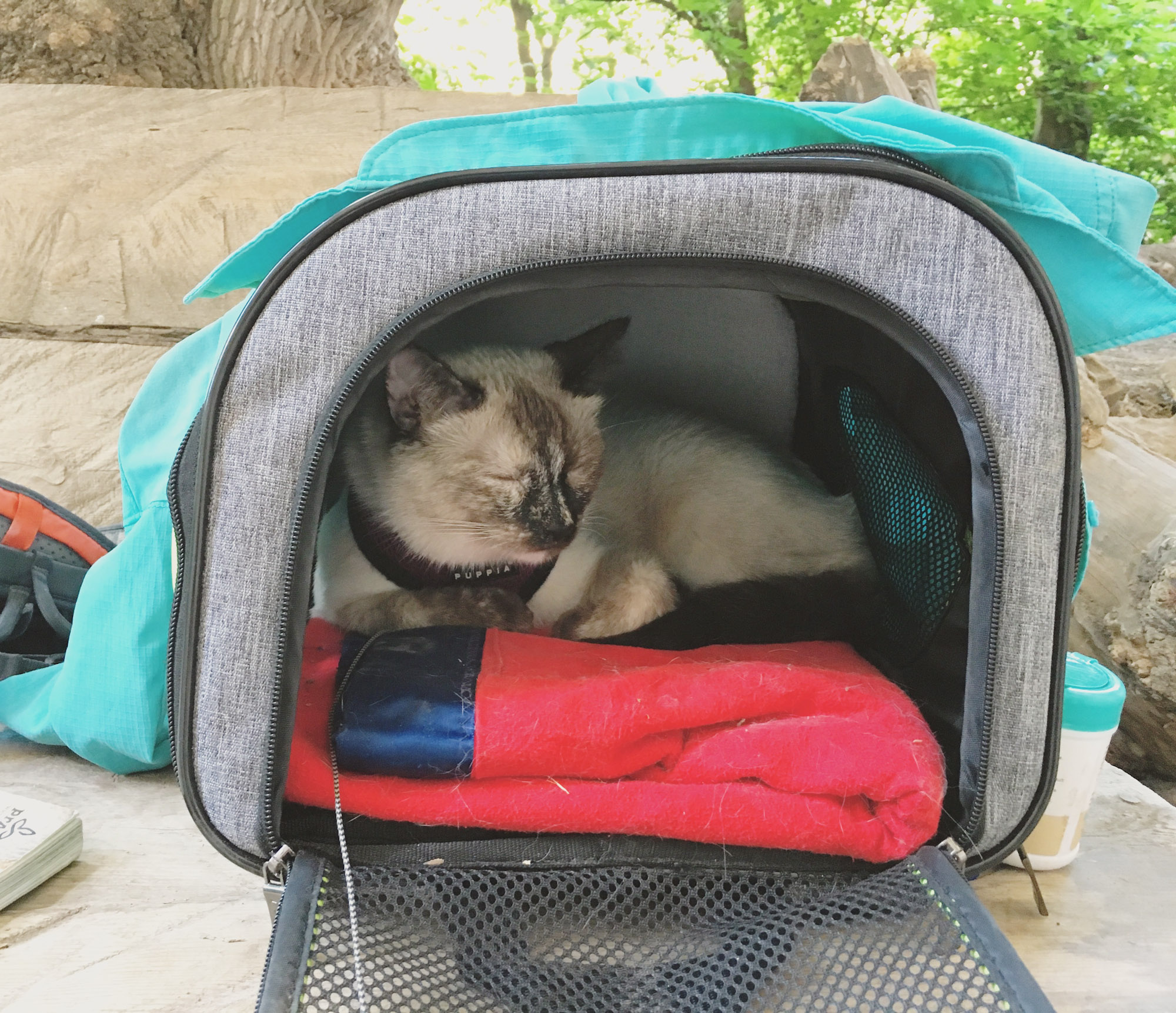 Artemis appreciates having a safe place to grab a catnap.

Treulieb-Kolostyak brings a cat carrier or backpack to the crag so if Artemis is ever scared “she has a safe space to retreat into.” She says this also helped with Artemis’ anxiety the first few times she went outside.

She also leaves Artemis’ carrier out in the house so that her crag kitty will remain accustomed to having the pack around. This also helps him refrain from associating the carrier with stressful situations such as trips to the vet. 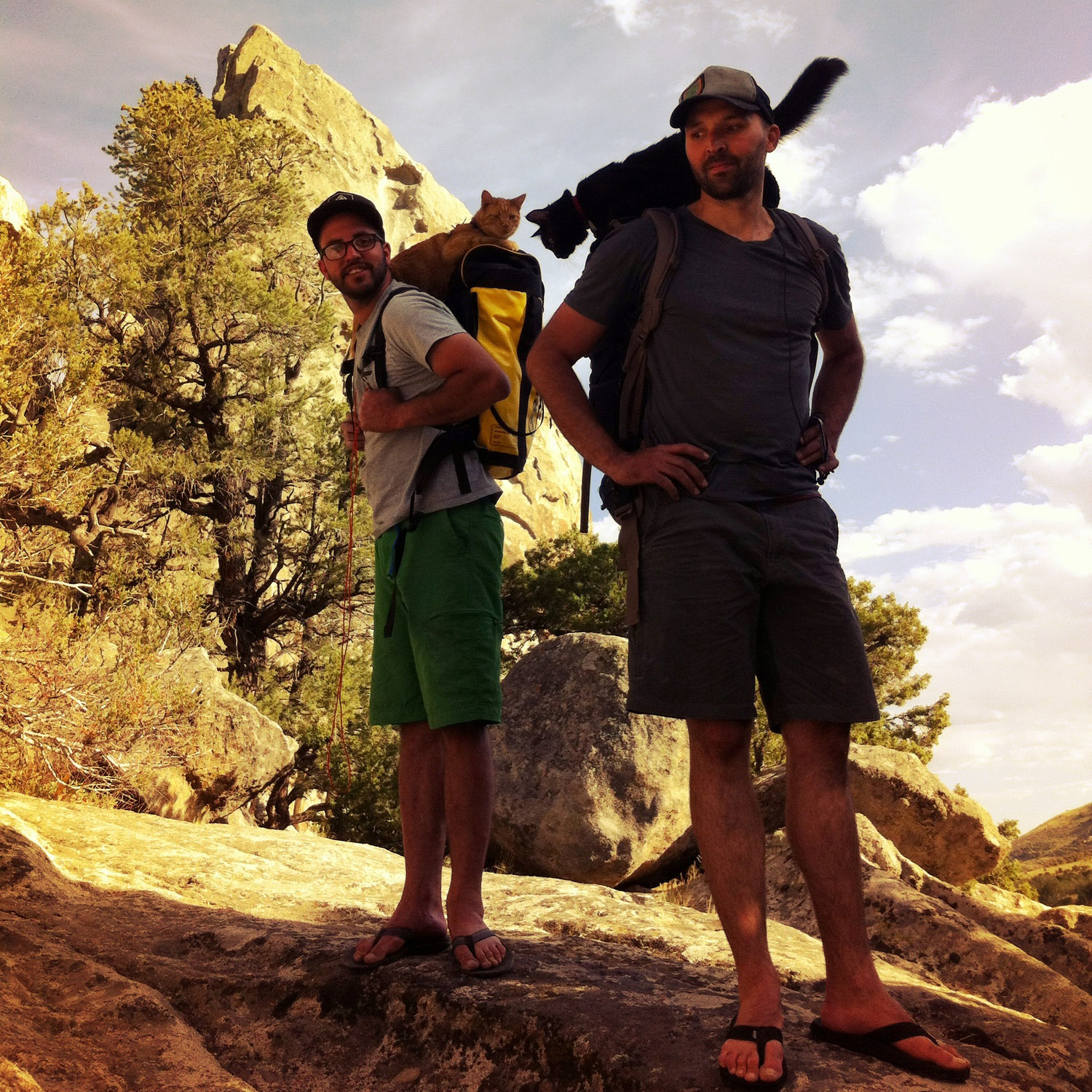 Craig Armstrong and Zac Robinson are changing people’s minds about adventuring with cats.

Most climbers aren’t accustomed to seeing a cat at the crag, which can be a source of conflict. Both Treulieb-Kolostyak and Samman report hearing fellow climbers make snide comments about their four-legged climbing partners.

During a trip to Ten Sleep Canyon, Samman asked a climber named Dylan Pike if he would tie up his dogs while climbing. “At first I was pretty annoyed,” Pike said. “Then I thought about it like a reasonable person and realized she had just as much right to bring a cat as I have to bring my dog. So I tied them up and everybody lived happily ever after.”

MORE: This cat can’t jump, but she sure can climb

Sandra says such interactions are common while climbing at busier locations. “I come off as the crazy cat lady,” she says. “I’ve heard every comment under the sun and the best one is, ‘Why would you bring your cat to the crag?’ I love that because I can ask, ‘Well why would you bring a dog? Or a child?’ It’s because we love them.”

On the other end of the spectrum, Evan recalls one climber he met becoming so captivated by Cali that the woman spent the whole day petting her. There’s an endless array of opinions relating to whether cats — and dogs — should be allowed at climbing destinations, so it’s best to be aware of these mixed feelings. 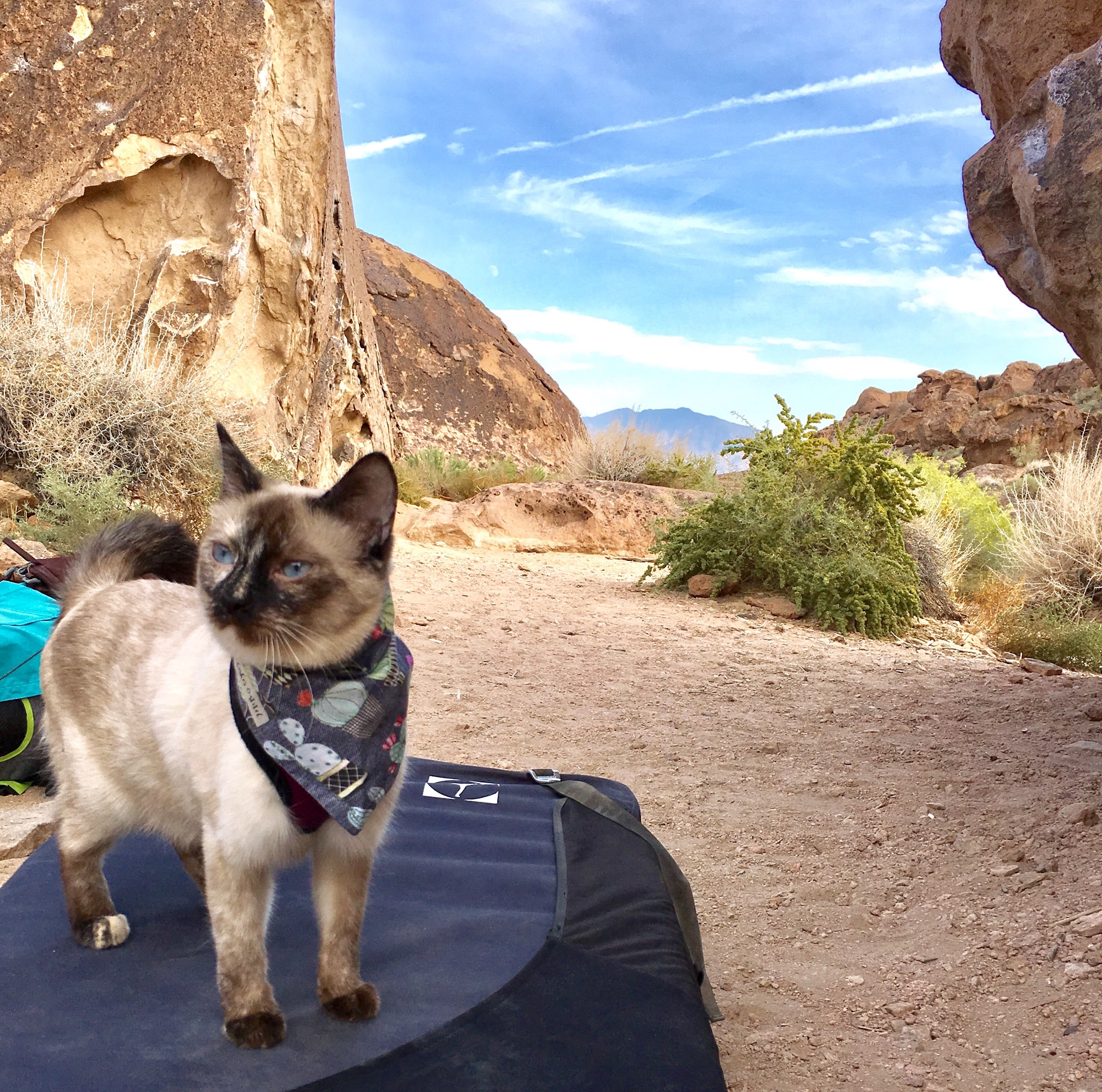 Artemis takes in the ‘meownificent’ view.

While there may be some naysayers, there are also plenty of outdoors lovers who enjoy their encounters with adventure cats.

“A lot of people say how much better it is to have a cat at the crag than a dog because they don’t rush up to people and bother them,” said Treulieb-Kolostyak. “And cats don’t bark and annoy people.”

Samman agrees that a huge pro to a crag cat is they’re “not disturbing the peace” of other climbers. “Cats were made for climbing. They are built for climbing,” she adds. “And Denali loves being at the crag.”

Of course, the benefits of bringing your feline friend along for the adventure aren’t just for you — your crag kitty can reap the rewards too.

“It’s really important for cats to get some outside stimulation,” said Treulieb-Kolostyak. “It’s good for [Artemis’] brain and her overall health, and I love seeing her out in the wild instead of just napping in the house.” 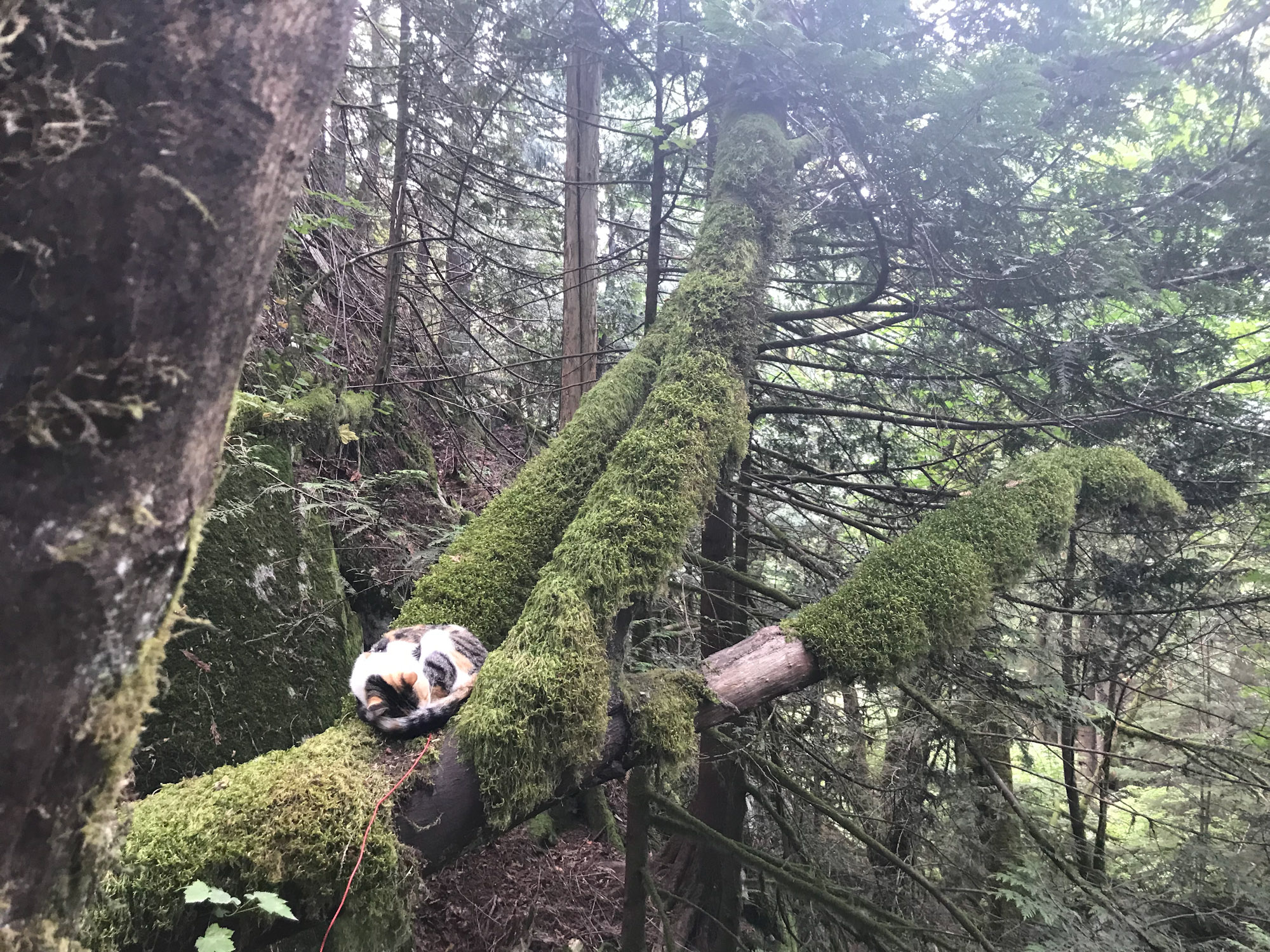 Cali takes a catnap in the woods.

Scroll through the gallery at the top to see more photos of crag kitties, and keep up with all their adventures by following them on Instagram: Artemis, Cali, Denali.