As a Floridian, I’m constantly aware of the fact that I may have to evacuate from my home in any given year. With cats, evacuation can be a challenge, but I’ve learned it doesn’t have to be impossible. It just requires a little preparation.

If you are staying in a hotel, check out my previous article for tips on how to prep a hotel room for a purrfect stay.

Regardless of where you live, it’s a good idea to make sure your cat is microchipped. Even the least-likely-to-bolt cat can become an escape artist during a stressful situation. Adverse weather conditions and fires can be especially unnerving for felines, causing their instincts to kick in. If your kitty gets out, a microchip can mean the difference between being lost forever and finding the way home.

Adventure cat Cash, and his owner Danielle Lauber, recently experienced an emergency when their apartment complex caught fire in the middle of the night. As an experienced adventurer, Cash was comfortable in his harness and ready to go, despite lots of loud noises and new people.

“Many of my neighbors came and spoke to me when they noticed Cash walking around on his leash and told me they were unable to find their cats because they hid when the alarm started going off,”  Lauber said. “Also, some emphasized that they wished their cats were leash trained like Cash because they were incredibly worried about their cats still inside the building, but many said that they would not have felt safe bringing their cats outside.”

Lauber attributes Cash’s calm demeanor to being used to unfamiliar people, loud situations and wearing his harness. Thankfully, no people or pets were injured in the fire, and Lauber and Cash were back in their home in a couple of hours. But now Lauber knows now how important it is to have an evacuation plan, even for an adventure cat. 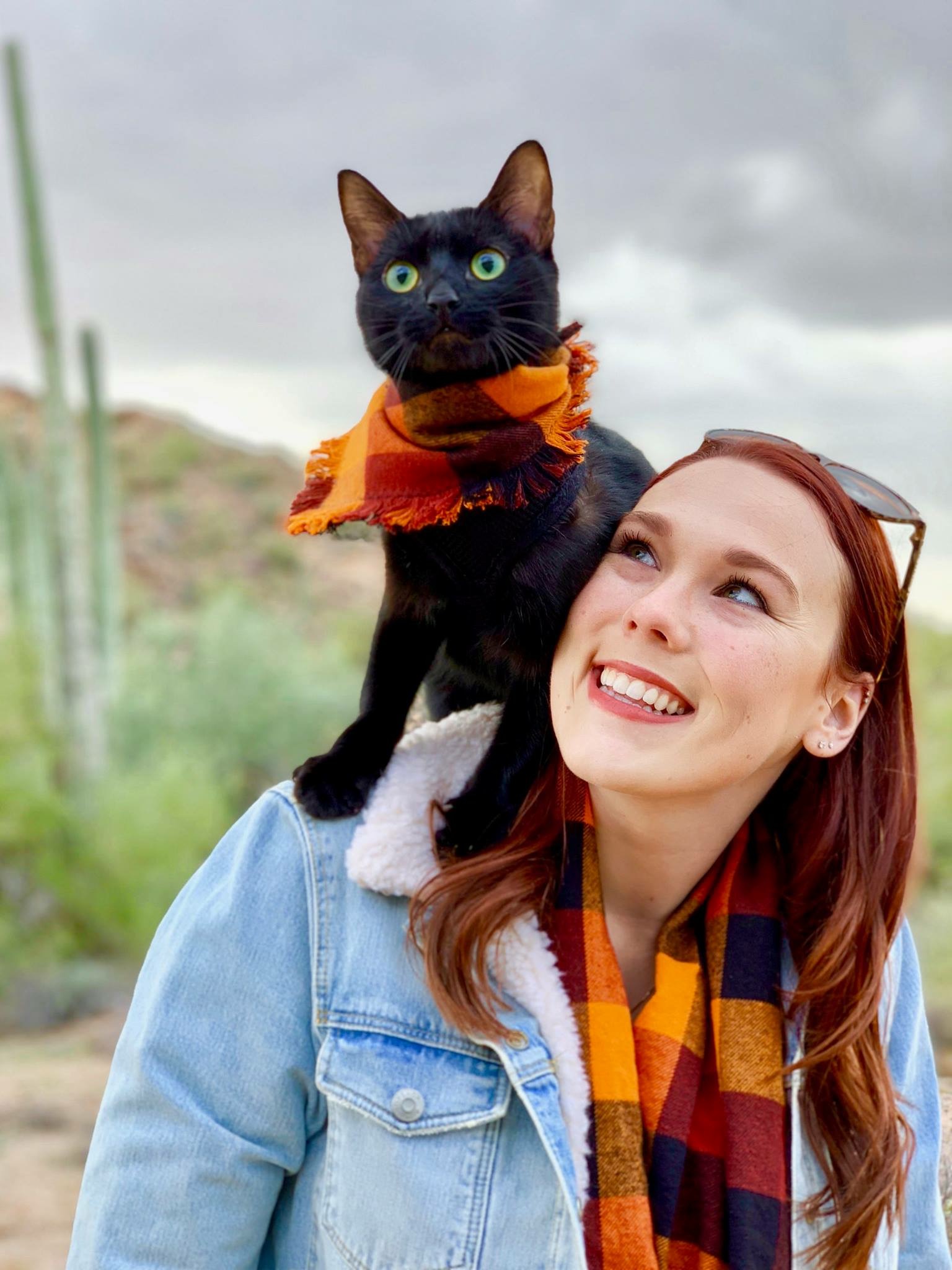 Cash is comfortable on leash and is used to be outside with his humans.

“Emergencies can be disastrous enough, but the added stress of not having your pet safely with you can make the experience even that much more devastating,” Lauber said. “This experience was really eye opening for me because I did not have a plan in place for evacuating Cash during an emergency.”

MORE: How to pack a kitty first-aid kit

One thing both Lauber and I have both learned is that it’s important to have a plan in place for each individual feline. Adventure cats will certainly have an easier time since they are accustomed to new places and strange sounds, but you’ll still need a plan.

“All pets are different and having a specific plan that fits your pet’s needs and helps get them out safely should be the goal — emergency plans are not one size fits all,” Lauber said.

In Florida, we keep hurricane kits in our homes with essentials in case we’re without running water or power for extended periods of time. After the apartment fire, Lauber says she now has an emergency evacuation kit for Cash. These kits are easy to put together, and can be customized for your pets.

Here are the basic items and some tips from experienced evacuees:

Litter/litter box – This one is at the top of the list because it’s the one that’s most often forgotten in an emergency. Even adventure cats may prefer a litter box to the great outdoors, so it’s important to have a portable bathroom for them. Disposable litter trays can come in handy for an emergency kit, but you Lauber suggests a handy travel one. “We are Instagram friends with a cat named Maverick whose cat mom started a line of adventure cat products,” she said. “They have a really neat bag that they use while traveling that has a built in hidden litter box that zips out.”

Food/water – This is an obvious item, but it’s a good idea to keep a stash of food on hand in a go bag just in case you’re evacuated last-minute. It’s best to plan for two weeks away from home, but even a small stash of food is better than none at all. Lauber keeps food and a collapsible water bowl with Cash’s backpack carrier and a gallon of water in her car. “In the event of a future emergency, I could grab his backpack and know that he would have food and water if we were unable to return home,” she said.

Medication – Bring all essential medications, including flea-prevention meds during an evacuation. If your cat is on a medication that requires refrigeration, invest in a small cooler with a long-lasting freezer pack.

Vaccination Records – During natural disasters, you may be evacuated to a community shelter. If you can find one that allows pets, it’ll require your cat be up-to-date on all basic immunizations, like rabies and distemper. The same goes if you plan to board your pet. It’s also a good idea to have these records if your cat has an emergency and needs to visit a veterinarian away from home. 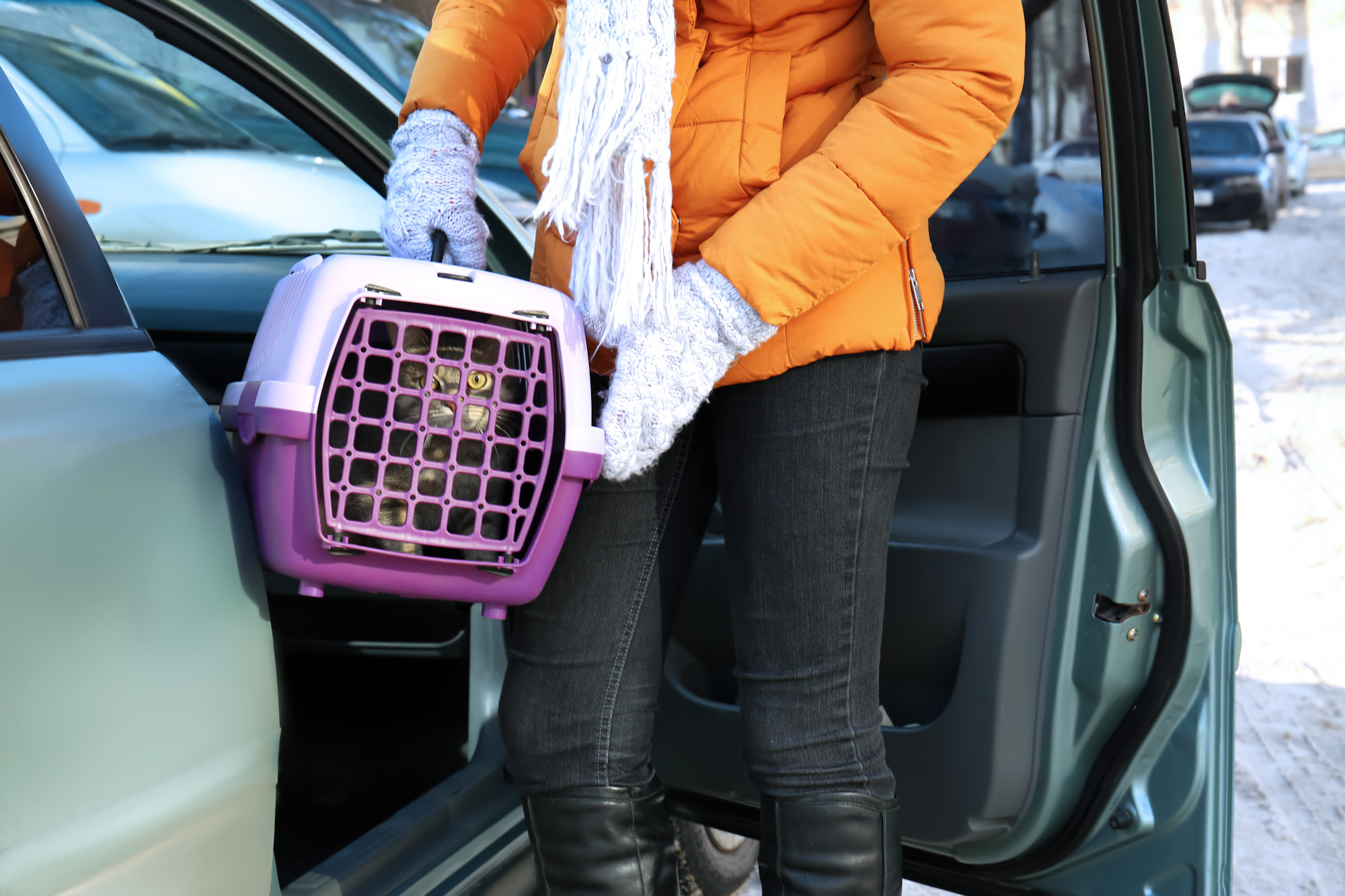 Make sure your cat’s carrier is an easy-to-reach place, so you can grab it quickly.

Treats, Toys and other Comfort Items – Sometimes a familiar scent or routine can make your cat feel at home on the road. If you regularly give your cats treats between meals, they’ll be expecting their usual. And just because you’re away from home, it’s no time to skimp on play time. Bring along a collapsible wand toy or play tunnel that you can easily stash with the cat’s carrier. It will keep them from becoming restless and should discourage destructive behaviors like marking or scratching.

Pet Carrier – Lauber uses a backpack because it’s easier than a bulky plastic carrier and it provides an alternative to the harness and leash if she needs Cash restrained. But it’s important to pay attention to what your cat prefers. If she’s most comfortable in her hard-sided carrier, that’s what you should bring. For our seven cats, we have multiple soft and hard carriers as well as three collapsible play pens that we can set up once we get where we’re going. These give the cats more room to stretch their legs but still keep them safe and secure in an unfamiliar space.

Harness/Leash – If you have an adventure cat, definitely bring his harness and leash. He’ll appreciate not being cooped up, and you’ll have an alternative to the carrier for fresh air and maneuverability.

Calming Collar or Plug-in —  If your cat is particularly nervous when traveling, lavender calming collars or Feliway pheromone plug-ins might help. It’s a good idea to test these out in advance to make sure they work for your cat, but many owners, like me, swear by them. You can also get your paws on some Composure treats, which help many kitties relax.

Silver vine – Veterinarian Dr. Lynn Bahr, owner of Dezi & Roo, recommends silver vine as a way to help distract cats from stressful situations. This powerful cat attractant can be used to encourage play or to simply get your cat in her carrier.

Of course, you may have other items you want to include. The point is to have an emergency kit handy and a plan in place. For with cats that are not as comfortable with loud noises like Cash, Lauber suggests practicing emergency drills with alarms, shouting and other unfamiliar sounds.

“Practicing evacuations when pets are overstimulated and working on training shy or anxious cats to come when called may be the difference between being able to get your pet out safely and being forced to evacuate without them,” Lauber said. “We all would like to think we would never leave our pet behind, but in an emergency if you truly cannot find your cat, you may need to get yourself out to survive.”

Of course, if you have leash trained your cat, any emergency evacuation has the potential to be another grand adventure instead of just a stressful situation.

“Having Cash be an adventure cat provided peace of mind, and I knew that I had Cash with me in the event that the fire spread to our apartment,” Lauber said.