By now, most of us have heard of the health benefits of owning a pet, including a lower risk of heart attack and stroke. But did you know that an animal companion can also improve your mental health?

“Patients with psychiatric disorders seem to benefit from the presence of pets to reduce fear and anxiety, and improved cognition in dementia patients has been reported,” said Chris Laurence during a lecture at the International Society of Feline Medicine/Ceva Welfare & Behavior Symposium in 2014.

It makes sense then for cat owners like Alexis Hinkley, who struggle with anxiety, to register their feline friend as an emotional support animal (ESA). 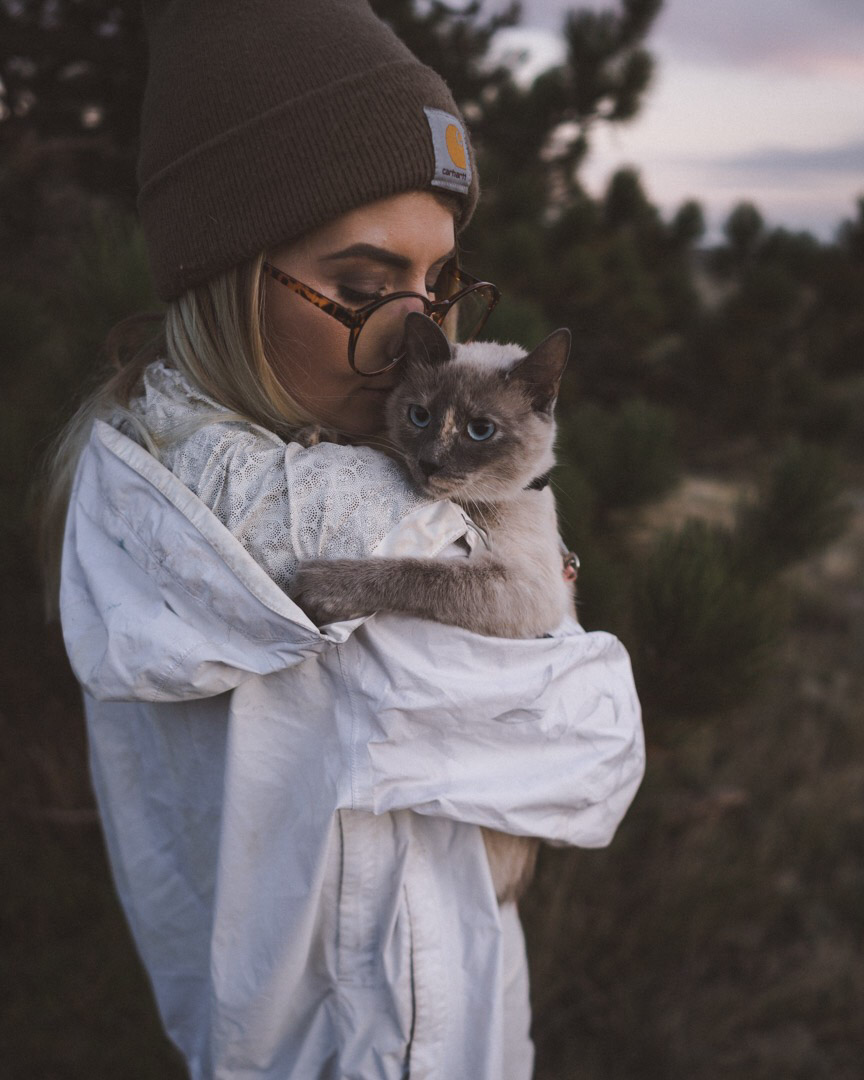 Hinkley first met her cat and ESA, Tuna, in January. Hinkley was depressed and had begun frequenting the local animal shelter to spend time with the animals. It was at the shelter, where she first saw Tuna, huddled in a corner and terrified.

“She was tiny and very thin but her crystal blue eyes shined through the darkness of the kennel,” Hinkley said.

Tuna was only 5 months old at the time and had just missed the cut-off for adoption. When Hinkley learned that Tuna would be euthanized in three days, she didn’t waste any time rescuing the kitty herself.

Shelter workers told Hinkley that Tuna would likely never warm up to humans, but as Hinkley gained the kitten’s trust, Tuna came out of her shell. “Tuna quickly became very attached to me,” Hinkley said. “Once she adapted to living with humans, she became the most affectionate animal I’d ever been around.”

Their friendship grew from Tuna being painfully shy and not wanting to eat anything, to eating heartily and curling up by Hinkley’s face every night at bedtime. The once-shy kitten even took to a harness and leash and began accompanying Hinkley everywhere, which provided both of them a great deal of comfort. 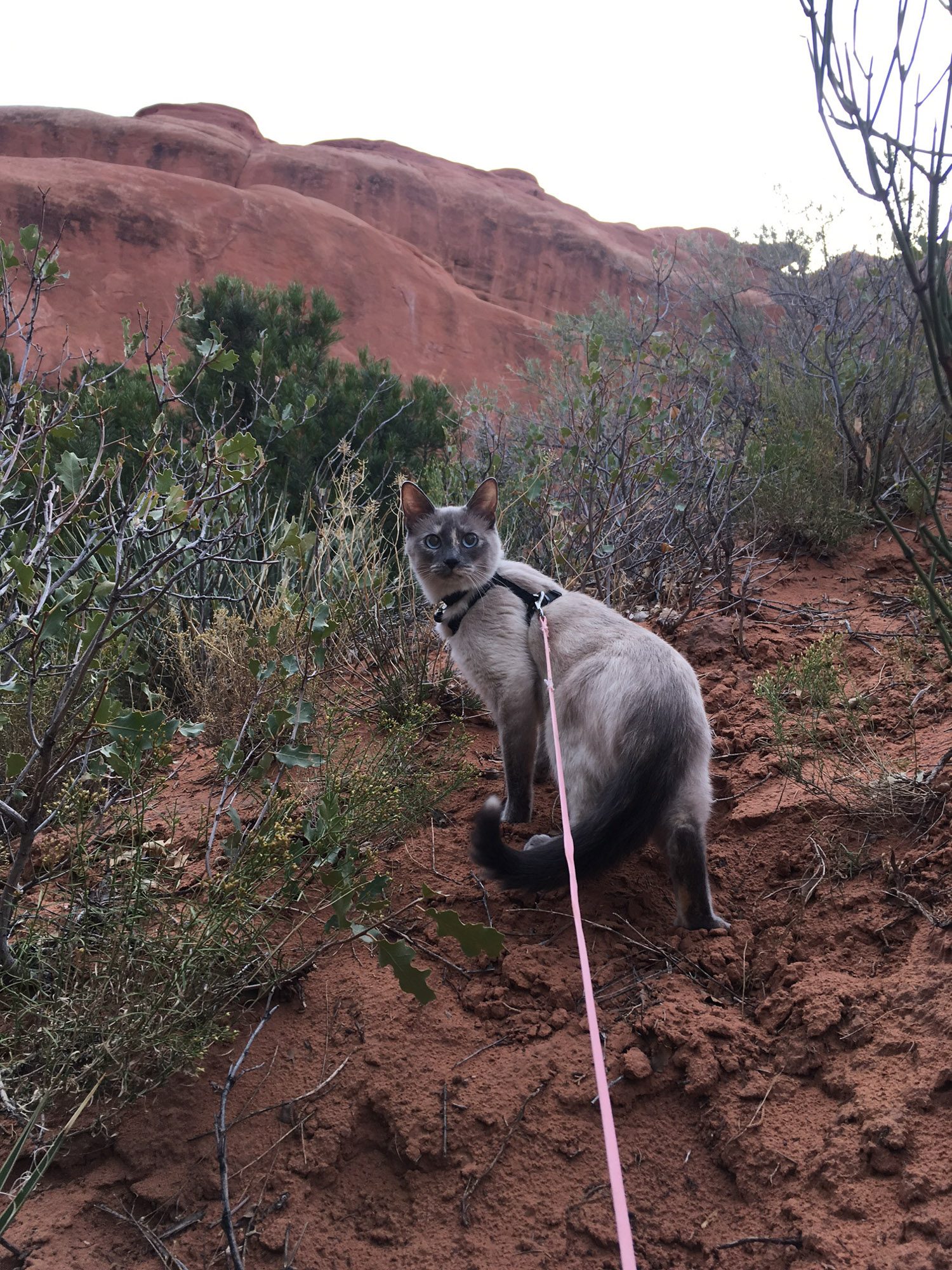 When Hinkley broached the idea registering Tuna as an ESA to her doctor, he was immediately on board. “A lot of doctors would rather try and treat mental illness without drugs first, [but] animals can be an amazing coping mechanism,” Hinkley said.

Tuna assists Hinkley by snuggling with her at night, which has helped her with insomnia. She can also tell when Hinkley is struggling and in need of a little cozy kitty time.

“When I’m anxious, it’s like Tune can tell, and she comes and sits in my lap or nuzzles my face until I calm down,” Hinkley said. “There’s a ton of scientific evidence that cats specifically help the release of oxytocin in the brain, which is a hormone that causes physical calmness and helps you fall asleep. But it’s more than just her presence. Being with Tuna is a better anxiety treatment than any medication.”

MORE: Therapy cat is constant companion — at home and on the trail

As an ESA, Tuna accompanies Hinkley most everywhere, including on hiking and camping trips. This summer, Tuna even tagged along on a trip to Moab, Utah.

“We arrived at Devil’s Garden campground in Arches National Park around 8 p.m. and realized that the campground was closed, and so we stopped by another car of kids our age to try and make plans,” Hinkley said. “The kids ended up being from Canada, and they had a cat with them too! We decided it was fate. We had to all camp together with our camping kitties. It was amazing seeing how much fun Tuna was having playing in the red sand and climbing on the rocks and boulders.” 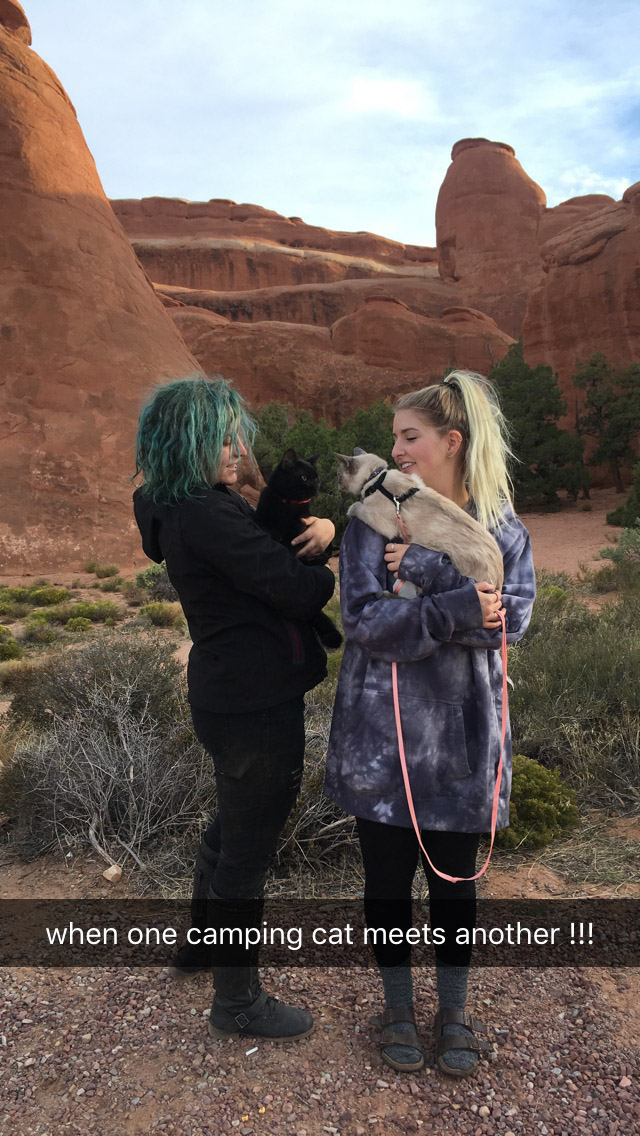 Tuna has also traveled around Colorado and throughout the Pacific Northwest, but Hinkley says it’s the personal journey they’ve taken together that’s made all the difference.

“Tuna has taught me so much,” she said. “Watching her grow from a scared, feral kitten into the cat she is today has been amazing. I couldn’t imagine life without her. She helps me with my anxiety, she seems to know when I need extra love, and she participates in my favorite activities with me. I like to think she rescued me — not the other way around.” 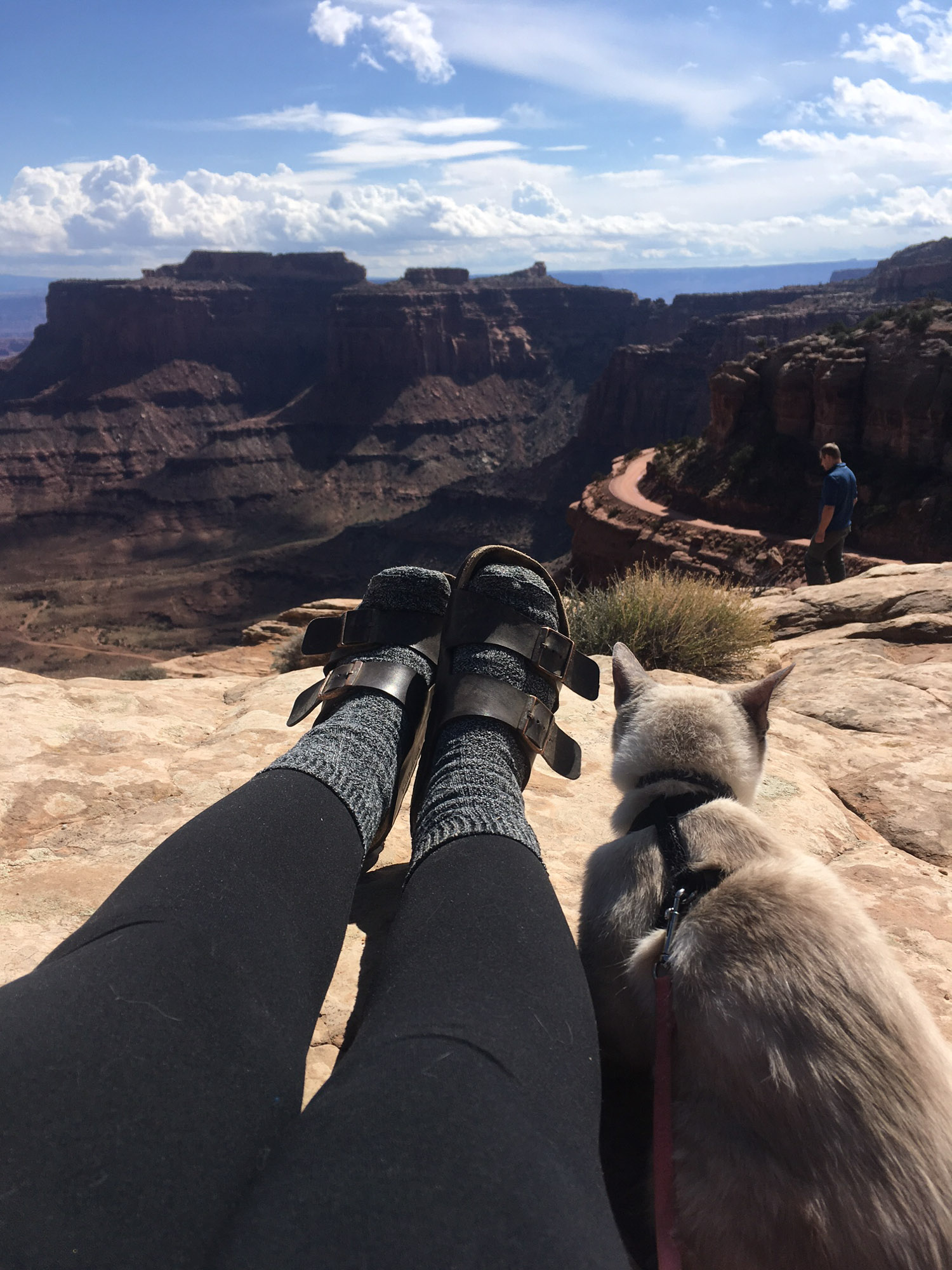 Scroll through the gallery at the top of the page to see more photos of Tuna, and keep up with all her adventures on Instagram.