Losing a pet is never easy, but it can be especially devastating when we don’t know what caused our cat to become ill in the first place. When Catherine Frock lost her beloved adventure cat, Pigeon, to an unknown illness, she knew she needed to do more to spread awareness about the uncommon but especially devastating disease known as FIP.

Pigeon suffered from what was most likely Feline Infectious Peritonitis, or FIP — a rare mutation of a very common feline virus that is almost always fatal. While most cats are carriers of the non-mutated coronavirus, FIP only affects about one in 5,000 cats and it’s particularly difficult to diagnose. Because of that, Frock will never know what killed Pigeon, but what she learned about FIP made her a staunch advocate for learning more about the disease.

“As any cat owner knows, cats can have a tremendous positive impact on your life, even if they’re only a part of it for a short time,” Frock said. “Pigeon instantly made me a happier person, made my life so much fuller, and he continued to do so every day since I met him — to a degree I didn’t know was possible.”

MORE: Man with 22 cats is determined to cure FIP

Pigeon’s story started out like many adventure cat tales. Frock met the tiny kitten when her family found him on a friend’s farm in North Carolina. He was small for his age, having subsisted on mostly straw for his first four or five months, and he was a bit skittish at first as well. Because her parents had found him while on a skeet-shooting trip, they originally named the kitten Skeeter. But Frock says she changed it to Pigeon after the clay disks used in skeet shooting and because it fit the kitten’s flighty nature.

“I later thought it was a bit funny that I’m a human who goes by Cat, and he was a cat named Pigeon,” Frock said. 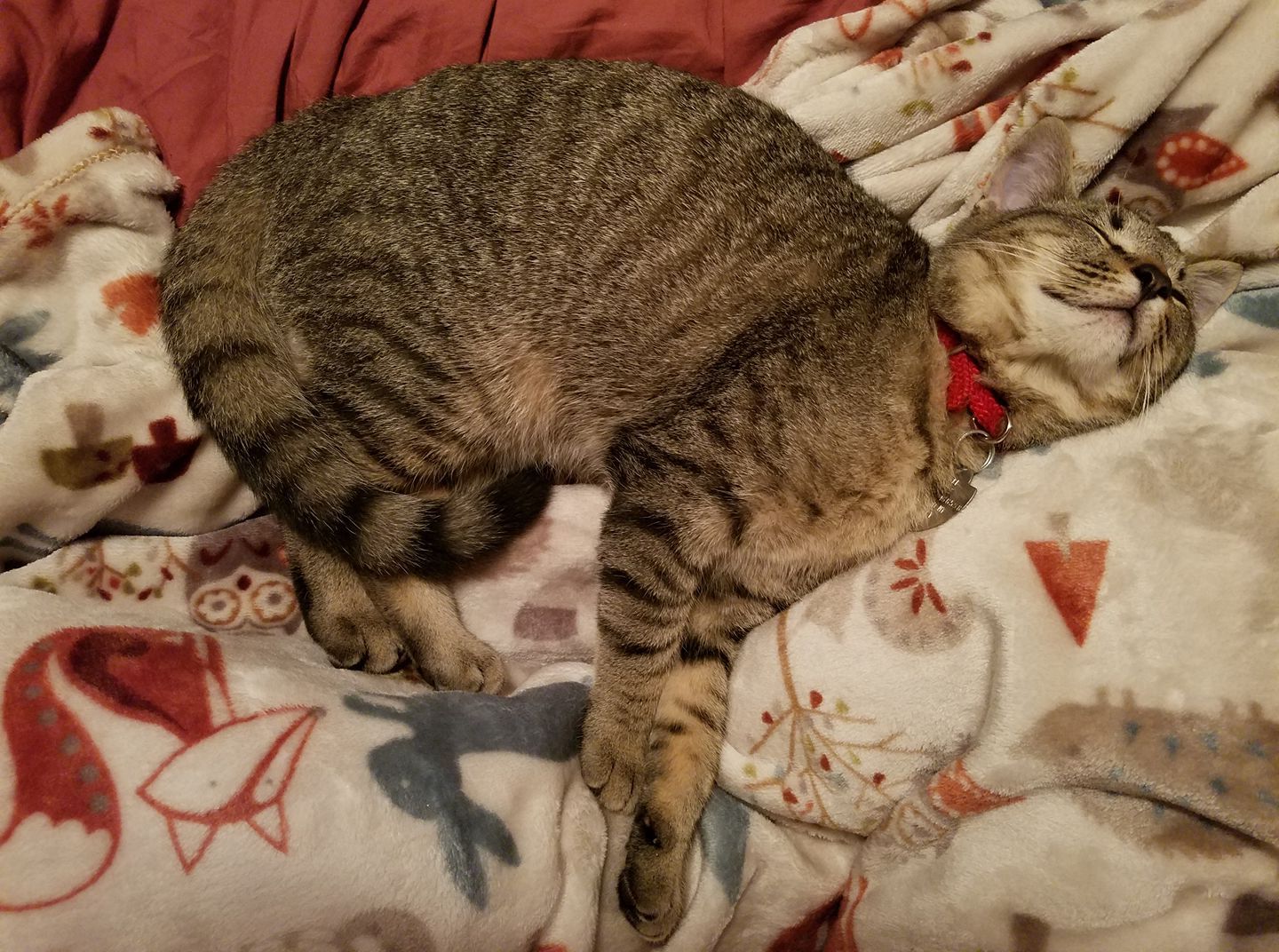 The cat named Pigeon made himself right at home the first night, curling up on Frock’s pillow and sleeping between her neck and shoulder. And he later took to leash training like a pro as well. In less than a week, he was comfortable enough wearing the harness inside that Frock was able to let him lead her into the great outdoors.

“I just let Pigeon wander around where he wanted to go, as cats do,” she said.

Frock says she was inspired to leash train Pigeon after a friend told her an impressive tale about camping with her cat.

“This was my first cat of my own,” Frock said, “and I immediately wanted to give him a better life by letting him explore the outdoors — which always makes me a happier person, so I figured it may also make a happier cat — by basically trying to do anything with him that a person might think to do with a dog.” 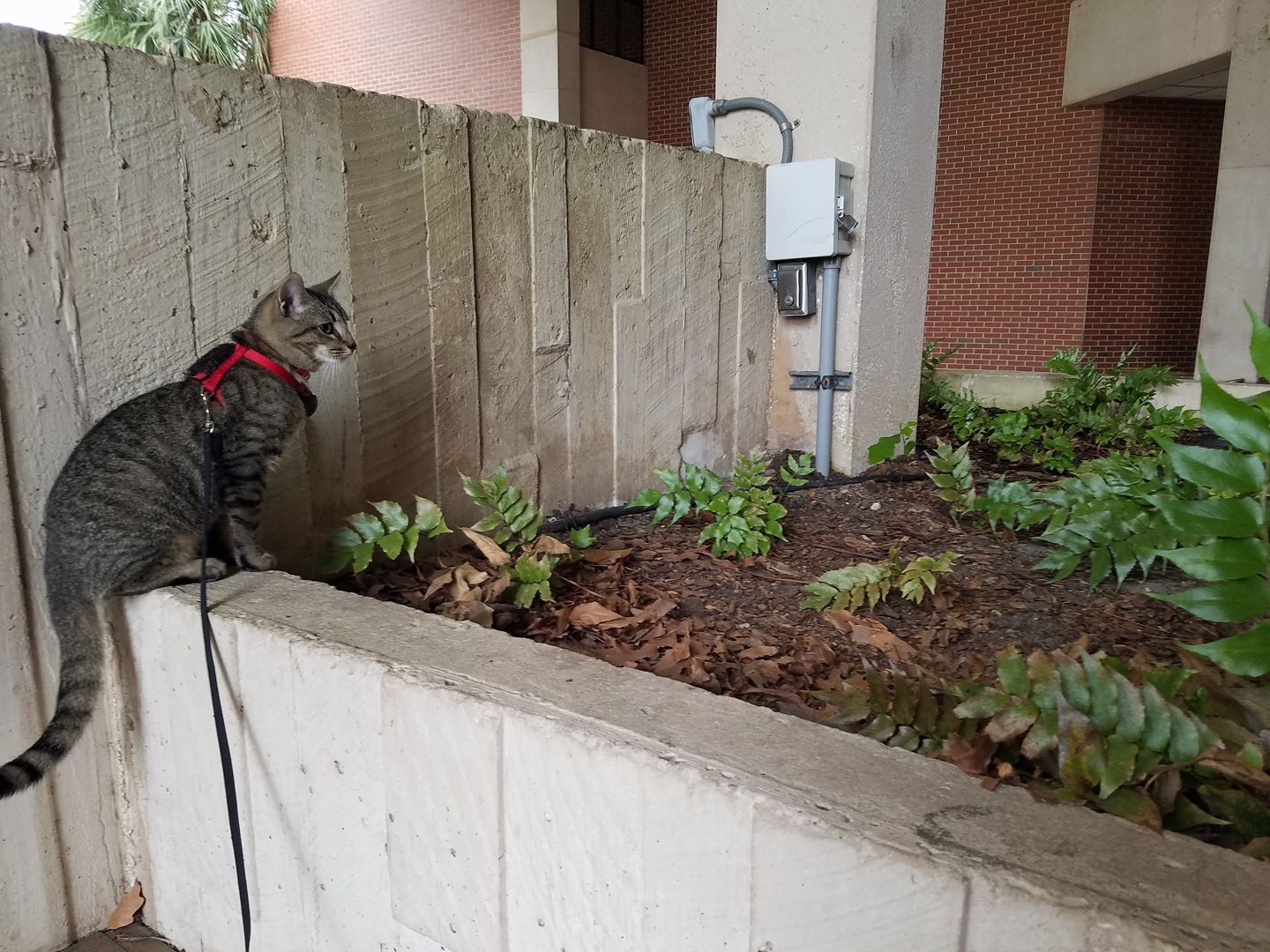 “People have told me that he was such an awesome cat because he had a good trainer,” Frock said. “But I’m not sure that’s completely true. I think Pigeon was just a naturally smart and adaptable cat.”

MORE: How to clicker train your cat

After a few backyard and neighborhood adventures, Pigeon enjoyed trail hiking with his human, where he loved exploring the Florida wildlife. Frock is a biologist and says Pigeon was just as keen on nature’s wonders as she is. 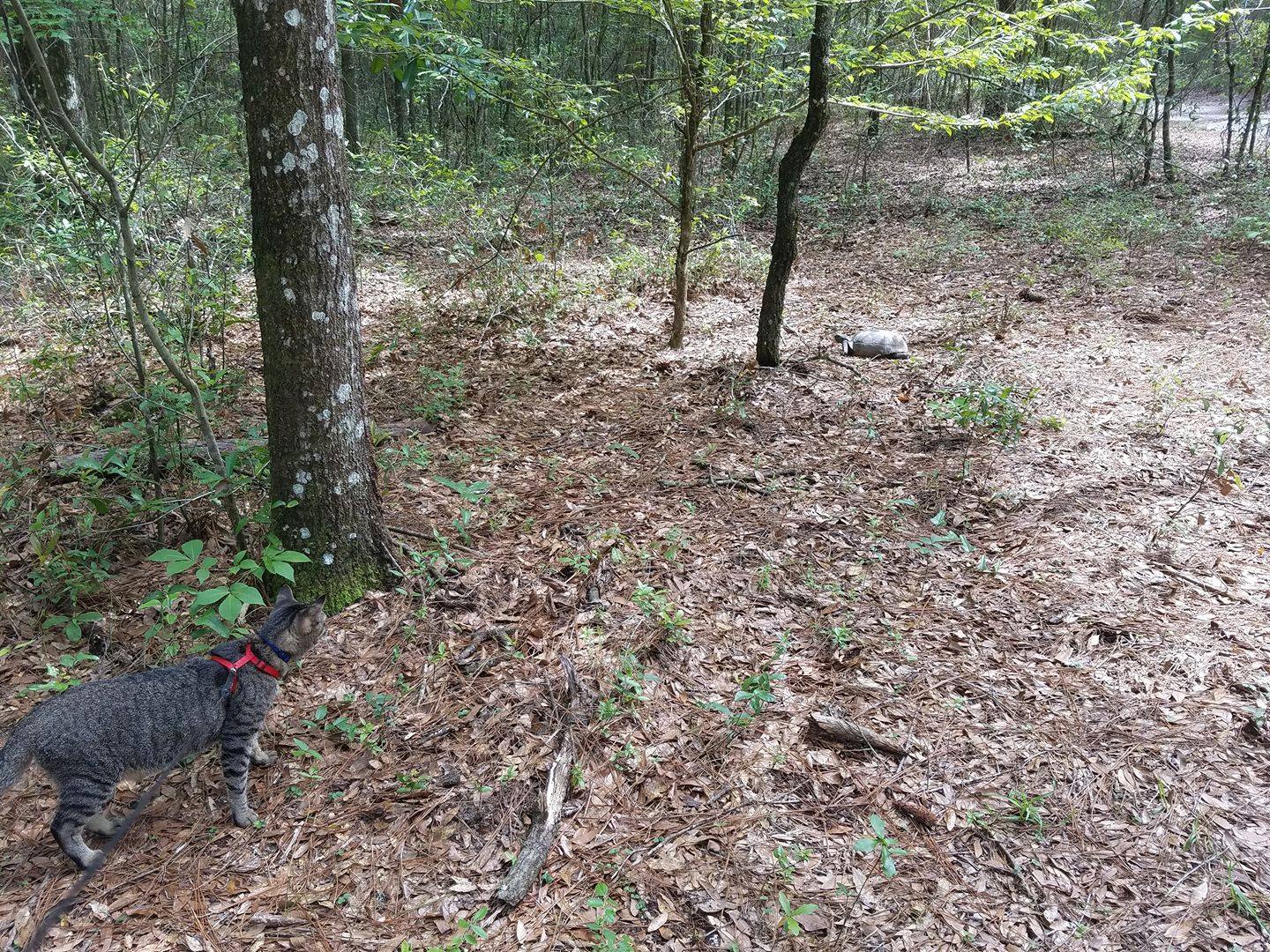 “He rarely meowed for food, but was always pretty talkative when he wanted his outside time,” Frock said. “I think exploring the outdoors was the activity he loved the most aside from cuddle time.”

Pigeon also enjoyed indoor adventures, making friends with a dog named Harley and a community cat named Bulleit, whom he had playdates with.

By all accounts he was a happy and healthy adventure cat. 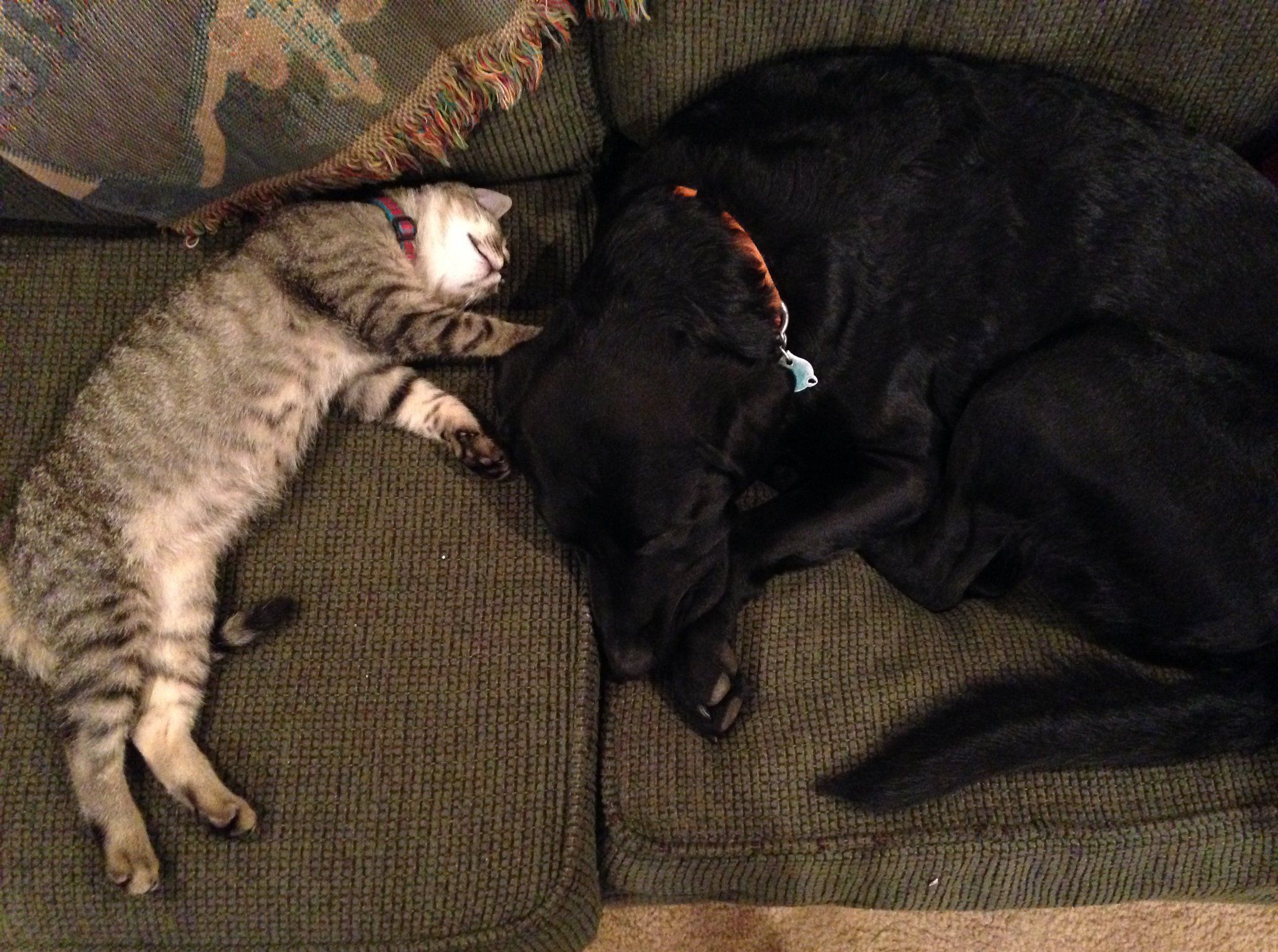 Then, at about 2 years old, Pigeon started exhibiting some unusual symptoms. He began running a fever. His eyes appeared cloudy too. The veterinarian gave him some medication, which relieved his symptoms, but then Pigeon began to eat less.

The fever recurred off and on, leading the vet to offer a potential diagnosis of toxoplasmosis, but Frock wasn’t satisfied. She took Pigeon to a university veterinary hospital. They suspected FIP, but without a highly invasive biopsy they could only use the process of elimination to give her a tentative diagnosis.

Unfortunately, Pigeon continued to deteriorate. His recurrent fever turned into hypothermia, his vision got worse, and vets worried he might have inflammation in the brain which caused him to stumble when he walked. There were moments of hope, but with each test that came back negative it became more likely that Pigeon had FIP and not something that was treatable.

MORE: 8 signs your cat needs to see a vet

When Frock made the impossible decision to euthanize Pigeon less than a month after his symptoms began, she asked the veterinarians to do a necropsy so Pigeon could contribute knowledge to FIP research.

“But I didn’t want to be informed of the results,” Frock said. “If there was any evidence from the necropsy that he had some treatable disease and not FIP, I didn’t know how I would be able to deal with the guilt of that.”

Losing any pet is devastating, but Frock hopes that Pigeon’s tale will help others learn more about FIP. 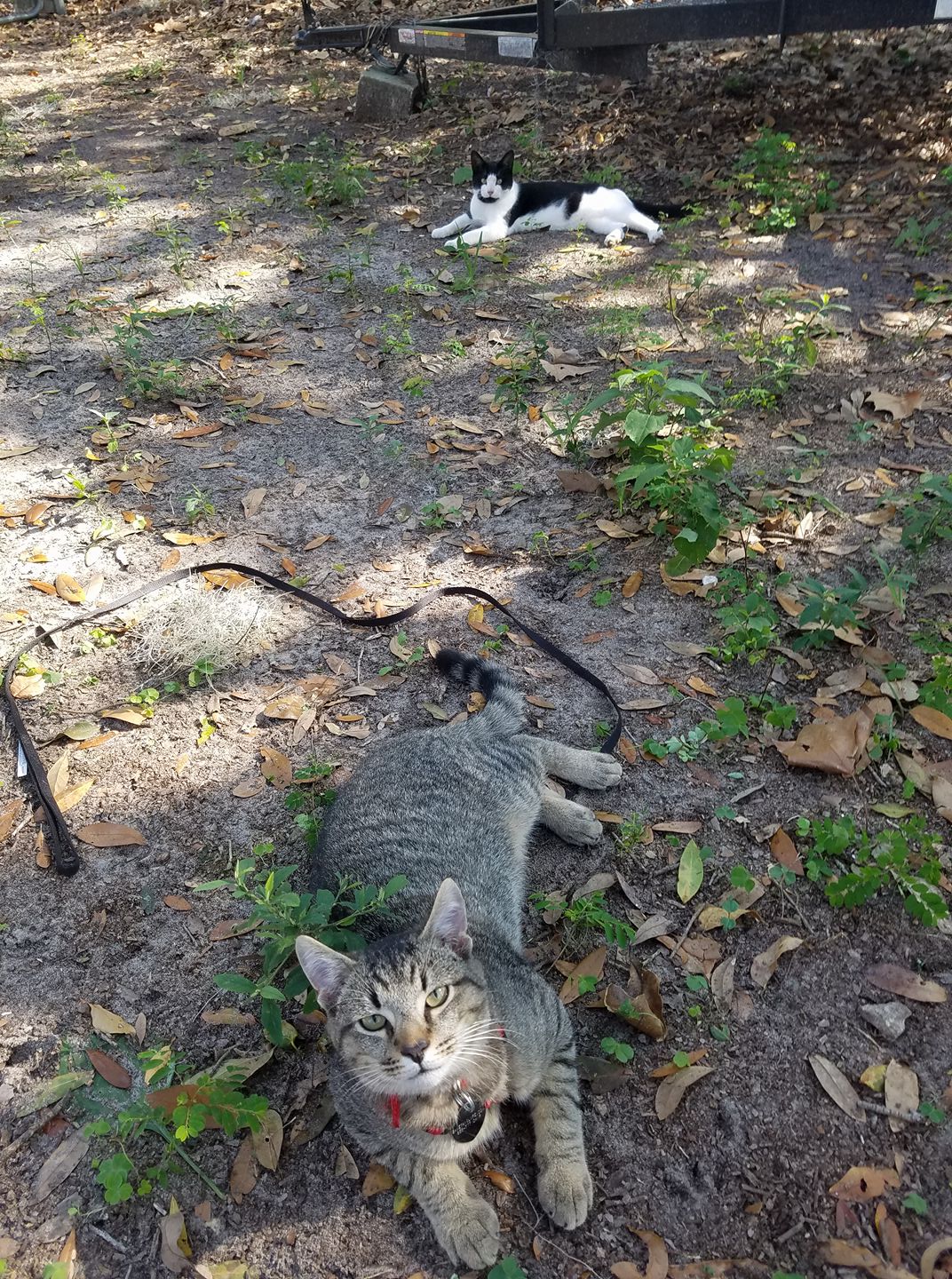 “In his death, I hope that other people in my life and whoever reads this article will learn something about FIP that they didn’t know before,” she said.

For Frock, learning more about FIP became a passion.

“There’s a lot of information about FIP out there, and some of it gives conflicting/outdated messages,” she said. “I’m a PhD candidate in biology who reads scientific papers for a living, so I basically put the rest of my life on hold for weeks to read any scientific paper I could find about what might be wrong with Pigeon and what to do about it.”

She says the best information she found, while still not 100 percent accurate, came from Cornell University. According to the university, “Any cat that carries any coronavirus is potentially at risk for developing FIP. However, cats with weak immune systems are most likely to develop the disease, including kittens, cats already infected with feline leukemia virus (FeLV), and geriatric cats.” It’s also more common in cats under the age of 2, but can develop at any age.

Even with all her research, Frock says she’ll never know how Pigeon developed what was probably FIP.

“It’s likely he was infected with the deadly coronavirus before we even met and there’s nothing in the world that could have been done to predict it or prevent it from mutating into FIP,” she said. “But the guilt is still there in me, that maybe there were things I could have done better.”

But even for the most diligent cat owner, FIP isn’t predictable. And few cat-owners know about it or its devastating effects.

Frock noted that even the list of ways to reduce the chances of FIP — such as never getting a rescue cat, never allowing your cat to go outside or interact with other animals — are counterintuitive to what cat owners and veterinarians have been encouraging as ways to improve a cat’s quality of life.

As it stands, there is no preventive vaccine for FIP, and treatments are scarce. In fact, even an extensive drug trial conducted at University of California-Davis researched two drugs that show “great promise” hit a roadblock in late 2017 when researchers were still looking for a company that would be willing to undertake FDA approval and licensing. According to UC-Davis, “This is not a simple task and could take one to two years before one or more drug is approved and made available for use by licensed veterinarians.”

And still, that would only offer treatment, and not a cure. 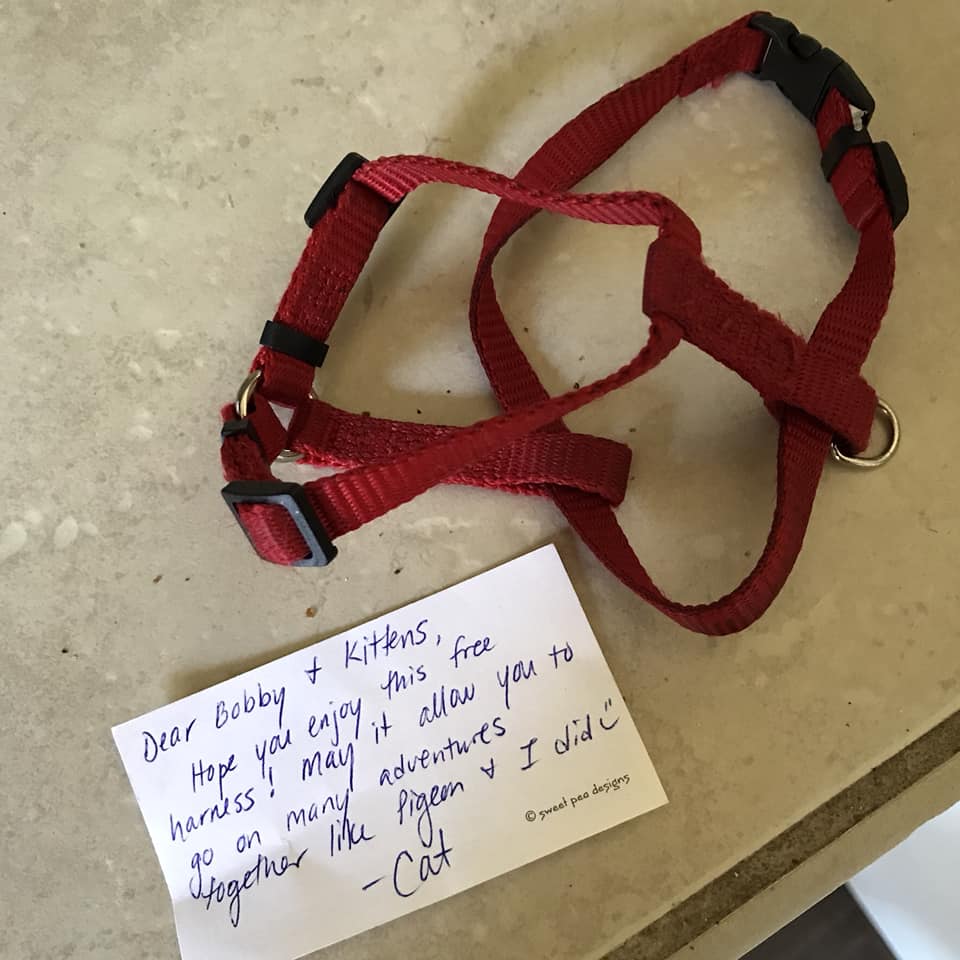 “It’s not something you want to think about when you have a perfectly healthy cat — all the things that could go wrong,” she said. “But that’s what happened to me and Pigeon, and it’s something that I won’t be able to help thinking about in the future. I wish Pigeon was still alive, but I also recognize that going through this experience will probably make me an even better cat owner.”

Frock says she definitely wants another adventure cat, who will probably be a rescue, but she’ll also read even more about a cat’s health and behavior before bringing it into her life. She also says she’ll pay extra attention to her cat’s eating habits and routines, and she’ll definitely get pet insurance for her cat.

“And if he gets sick with something and the vets don’t know what it is, I’ll know to immediately ask for all the tests they can think of because time is critical, tests to rule out other possibilities can take a long time, and FIP waits for no one — but hopefully one day soon, there will be a cure or at least a good treatment option,” Frock said. “And I’ll remember Pigeon as I, once again, enjoy and cherish every day with my cat, because life is fragile and beautiful and full of love when you have an irreplaceable relationship with a cat.” 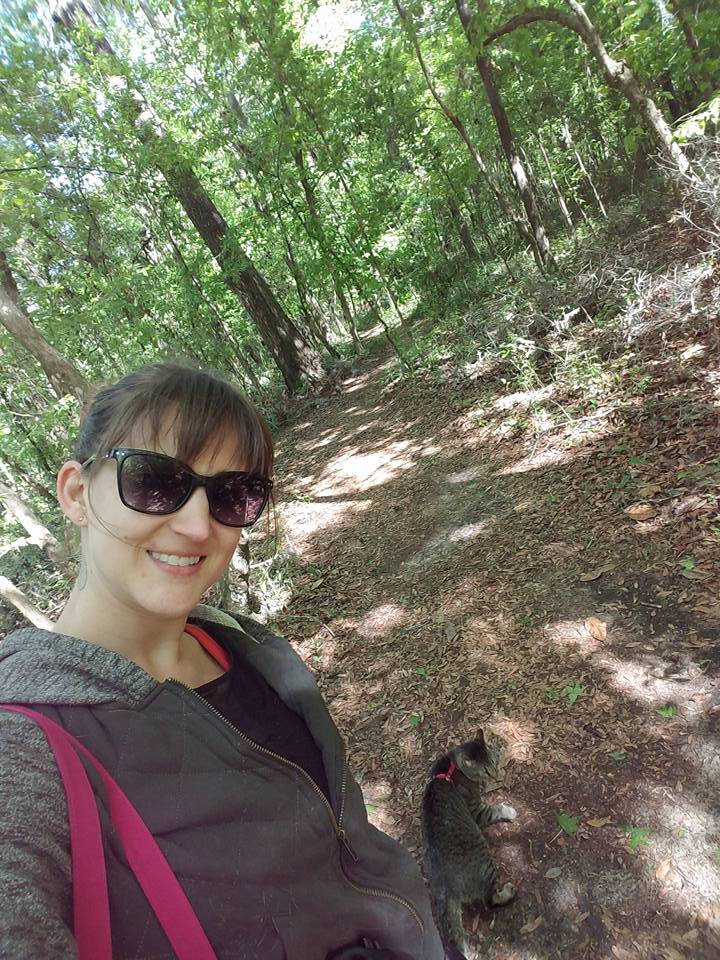 All photos courtesy of Catherine Frock.

Give to FIP research.